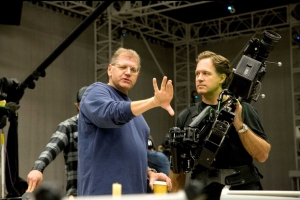 Academy Award-winning director Robert Zemeckis, he of blockbusters from Back to the Future to Forrest Gump, leans back in his chair, his mood showing a bit of wear and tear during a pavement-pounding tour promoting his new film Flight.

An R-rated drama starring Denzel Washington as an airline pilot struggling with alcoholism and cocaine addiction, it’s the kind of adult fare that’s increasingly becoming an endangered species at the multiplex, and the filmmaker spares no opportunity to needle the circumstances of our interview. In a change from the usual swanky Los Angeles press junkets, Flight was considered such a tough sell that the director has been sent out on the road, glad-handing the public at advance screenings and –ironically enough– studio-sponsored cocktail receptions.

“Here I am,” Zemeckis says with a laugh that isn’t exactly warm. “You guys aren’t in L.A. I’m here.”

“The real story is that this movie was made by a major studio,” he continues. “I don’t think I could make Cast Away today. No way. Here’s the problem: This thing has happened in the industry where movies are very expensive. They have a very short shelf life, so you have an expensive movie that has to make all of its money back in three days. For that to happen, all the world has to see the movie. And if everybody in the world has to see the movie, then by definition, it can’t be about anything, right?

“So therein lies the problem,” Zemeckis sighs. “The only solution for filmmakers, if were gonna make a movie that has any kind of edge to it, or something that might ruffle someone’s feathers here or there, you have to make it for very little money. And that’s just the state of the art form.”

Zemeckis and Washington deferred their salaries to bring Flight in at a bare-bones $30 million budget, but the studio still sought to soften a few of the film’s rougher edges. “You do get those notes. They can’t help themselves. Can’t the girl come back at the end? That guy in the stairwell with cancer… can’t we see him later in the movie, and he got cured? Some things never change. But when Denzel and I say were going to waive our fees, that conversation is very short-lived.”

Couldn’t they also end that conversation by both pointing at their shelves full of Oscars? The director shakes his head wearily. “Not anymore.”

Zemeckis spent the past 12 years working exclusively in motion-capture animation, but scoffs at questions of any difference between mediums. “Movies are movies. It doesn’t matter whether they’re virtual or you’re bending light through a lens, it’s the same process.” Just don’t assume his return to live-action meant he was tempted to shoot Flight on 35mm film.

“That’s like asking me if I came here on a steam train,” he scolds. “Everything is better in the digital age. “When you look at those effects in Back to the Future, they’re quaint. That was the best we could do–which is great, because it exists as a historical document. That was what the state of the art was in 1985, and this is what the state of the art is in 2012. Everything evolves. Everything changes.”

Between Cast Away and Flight, Zemeckis has become our foremost chronicler of plane crashes, yet has no fear of flying himself. “I think the real horror of flying is in the terminal. I’m much more worried whether I’m gonna get my bags than if the wings are gonna fall off the plane or if the pilot’s gonna be drunk. What are my chances that the plane will arrive on time? Pretty slim. Statistically, you’re much safer being on an airplane than being in a car. There are a lot more drunks in cars than there are flying airplanes.”

On the way out he adds that well know Flight did well if the next time we see him, we’re in Los Angeles.