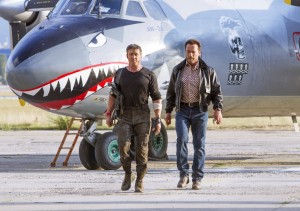 And I’m the guy who usually likes this kind of crap.

Sly Stallone’s AARP gravy train grinds to a halt with this desultory third installment, which has none of the original picture’s splattery, disreputable charms and can’t even muster much in the way of the too-slick previous sequel’s in-jokey rib-nudging. The Expendables 3 is just a glowering slog, lorded over by a morose star pandering on autopilot, surrounded by such an overcrowded cast that characters are still being introduced to one other during the final action sequence.

I’ve quite enjoyed this recent run of old fart B-movies spurred on by the surprise success of the first Expendables, which happily coincided with a certain disgraced former Governator’s return to the motion picture industry. Unfortunately The Last Stand, Bullet to the Head and Escape Plan tickled my nostalgia for the Betamax era to disastrous box office returns – which I guess is why we’re stuck now with a cleaned-up, PG-13 Expendables adventure that wastes half of its bloated, 126-minute running time introducing an entirely new crew of millennial nobodies.

Having more in common with Blade: Trinity than just Wesley Snipes, The Expendables 3 similarly feels like a backdoor pilot for a franchise reboot that forgets every reason people go to see these silly movies in the first place. We want groaner catch-phrases, comically oversized weapons, and an old-timers-day roster of aging muscle-heads inflicting absurdly graphic violence amid an air of forced, beer-commercial conviviality.

Instead, for some insane reason The Expendables 3 takes itself very seriously. After a less-than-thrilling prologue in which the crew busts their old comrade Snipes out of an overseas prison (he claims he was locked up for tax evasion, har-har) we settle into a botched job in Somalia, interrupted by a face from the past.

Turns out that Mel Gibson’s wild-eyed, psychopathic arms dealer was one of the original expendables way back in the fifteenth century, or whenever they first got together. But now he’s gone over to the dark side, and to prove it he shoots Terry Crews. (Don’t worry, nobody’s ever actually expendable in these movies. Crews is just sidelined in a hospital for the rest of the picture because he was busy on a funny TV show, and with Snipes around now the studio probably worried that people would get confused if there was more than one black guy at a time.)

Harrison Ford steps in for Bruce Willis as the crotchety CIA agent pulling all the strings, grunting out exposition as if suffering from irritable bowel syndrome. Captain Solo looks exceedingly unpleased to be here, despite being granted the honor of the one f-bomb allowed by the teen-friendly rating. (Seniority has its perks. Poor Gibson is stuck saying: “I don’t give a fart.”)

Ford wants Gibson apprehended and charged with war crimes. Credit Sly for figuring out that the only way a lot of the audience will pay to see a Mel Gibson movie these days is if the plot revolves around him being dragged to The Hague.

Heartbroken that one of his hard-boiled mercenaries was actually wounded in the line of duty, Stallone fires the old crew. Knowing that Gibson is the most dangerous adversary they will ever face, he can’t handle the idea of sending his good friends into certain death.

So instead of bringing along this band of loyal and grizzled experts who all have a personal stake in the assignment, Sly quite sociopathically hires a bunch of wet-behind-the-ears kids he can lead to slaughter on his own personal suicide mission. This choice did not endear me to the character.

Even more problematic is that it makes the film’s flabby middle hour stop dead so that Kelsey Grammer (no, I don’t understand what Frasier is doing here, either) can lead Stallone around various third world locales recruiting the new team – each granted his or her own stand-alone introductory action scene and tiresome character business. Then we have to listen to them talk in tone-deaf youth-slang and make fun of Stallone for not knowing how to use computers, before they eventually blow the job and get captured so then all the old gang can come back to rescue everybody and this lumbering thing can finally get around to being a fucking Expendables movie already.

Director Patrick Hughes shoots everything through an ultra-modern, digitally-desaturated gun-metal sheen that actively works against whatever retro appeal the picture was aiming at, and because of the dreaded PG-13 rating we watch thousands of rounds of ammunition being fired without ever seeing anyone get hit. I doubt any actor besides Stallone was on the set for more than three days, but there’s a problem beyond these scenes feeling cobbled together according to availability.

Hughes has no idea how to film his stars. All the would-be-iconic reveals fall flat, and everybody just appears uncomfortable at unflattering angles. (Arnold Schwarzenegger, so goofy and lively last year opposite Sly in Escape Plan, seems particularly miserable here and he looks bloody awful.) Jason Statham is barely in the picture, and why bring Jet Li back only to have him shoot a machine gun instead of fight? It’s all just a tremendous misallocation of resources.

Gibson has a couple of fun, unhinged moments, pointing out the hypocrisy of these mass murderers calling him a war criminal. But Stallone hasn’t been this mopey and lifeless on-screen since his stultified mid-nineties run of stuff like Assassins and The Specialist. His performance here is so flat, I thought for a moment that during shooting Sly realized he should’ve quit while he was ahead. But then why would we expect a guy who’s starred in ten sequels to understand the concept of diminishing returns?