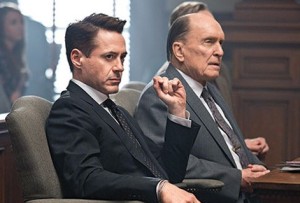 The running time was listed as 141 minutes, but somebody was obviously lying.

I write this to you now from a darkened theatre in a panic, currently entering hour number seventeen of The Judge with no end in sight. My fellow patrons are audibly groaning from low-blood-sugar and hunger pangs – most have removed their shoes and other articles of clothing. As the film grinds ceaselessly onward into morning, stubbornly refusing to even hint at the slightest sign of a resolution arriving anytime in our near, rapidly-diminishing futures, I’ve taken pen to paper realizing these words may very well be my last will and testament. All is lost.

We arrived with modest expectations. The prospect of seeing actors like Robert Downey Jr., Robert Duvall, Vera Farmiga and Billy Bob Thornton battling it out within the hammy confines of a courtroom drama surmounted the toxic notices that greeted this picture when it premiered last month at the Toronto International Film Festival. It was a simpler time back when the movie began, so many years ago.

Downey stars as a hot-shot big-city defense lawyer, working the umpteenth variation on his smug, “What, Me Worry?” Tony Stark persona. Upon news of his mother’s death, Downey returns to the cornfields of Carlinville, Indiana for awkward reunions with his estranged family. He’s got a bullying big brother who carries a grudge (Vincent D’Onofrio) as well as a cutesy, simple-minded little sibling (Jeremy Strong) calling to mind a rather legendary monologue Downey delivered in Tropic Thunder.

But mostly Downey’s got problems with the eponymous Judge, played by Robert Duvall on gruff autopilot as a not-so-great Santini. The Daddy Issues run thick in this movie; none of the boys ever mention Mom again after she’s planted in the ground. They spend the evening of her funeral doing shots at the local bar and telling stories about their father — who apparently makes even his children address him as “The Judge.”

Six or seven weeks into this movie’s gargantuan running time, The Judge is arrested for the vehicular homicide of his most notorious nemesis. Vast portions of our lives are wasted, watching a resentful Duvall insist on employing local yokel Dax Shepard as his defense attorney while Downey stews and sputters on the sidelines, his expert counsel refused.

I will never get back the time that I lost during The Judge’s go-nowhere first several months, but fuck me if Downey isn’t terrific. What remarkable alacrity he has as a performer, always playing every scene two steps ahead of the beat – putting to shame sorry screenplays like this one. He’s got big, soulful eyes and carries himself with such feminine delicacy that we gleefully indulge his often monstrous glibness.

Downey’s also great with women. I can’t think of another contemporary actor who approaches his female co-stars as if they were dance partners, and he tangos gorgeously with Vera Farmiga – unfortunately slatterned-up here in fake tattoos and peroxide hair. She’s playing his resentful, abandoned high school sweetheart, and far too much of their banter is subsumed by an insane, what-the-fuck-were-they-thinking subplot about how the easy, twenty-something barmaid Downey banged in a phone booth the other night (Leighton Meester) just might be their prom night offspring.

Yeah, so it’s practically Oldboy – except they don’t make a big deal about it. Just a casual incest comedy subplot.

I hope this movie ends soon. I hope that I will still have a job when it’s over, and I’d also like to see how the mid-term elections turn out.

Sad to admit, but the main reason I wanted to go see The Judge tonight, in spite of its reviews, was because they shot three days last summer across the street from my old apartment in Waltham, MA. One Monday afternoon I had just watched a screener of The Act of Killing and, still totally rattled, stepped out for a pack of cigarettes — when lo and behold there was Robert Duvall sitting in a chair on the lawn across the street from my local convenience store, reading a newspaper. (I noticed all the trucks and camera equipment much later.)

A gaggle of children clutching Avengers comics lurked around the perimeter of the set, anxiously informing me that Iron Man was inside that old building over there and hours ago he had promised to come back out soon. I wanted to tell them that Tom Hagen was less than twenty feet away, because that would have blown my fucking mind at their age. But do kids even watch The Godfather these days? Did they ever? What about Apocalypse Now? I guess I had kind of a weird childhood.

Half the block had been done up to match the corn-pone Indiana setting where this movie takes place, but if you moved the camera an inch to the right you’d catch a dive-bar notorious for its filthy carpet and questionable sanitation, plus an overabundance of fist-fighting and low-quality cocaine. The proprietor had scrawled a sign on spiral notebook paper reading “Actor’s Welcome” (complete with lovingly misplaced apostrophe) and taped it to the back door of his pub. I do hope Downey never took him up on the offer, given prior histories. But Duvall probably could’ve handled himself in there.

Duvall is pretty bad in this movie, though. As The Judge still continues to ramble on through a multitude of endings and exasperations for what will presumably be the rest of my life, I cannot help but chuckle with fondness at Janusz Kaminski’s cinematography, in which even the most casual conversations are backlit with a blinding glow befitting a choir of heavenly angels.

Oh, big sigh of relief guys: Downey didn’t actually fuck his daughter. Turns out it was just his niece, which according to this movie is way less gross so we can laugh it off. (I feel sick.)

The jury has finally reached a verdict, which in my experience with these kinds of pictures means we’ve only got about an hour or so to go. Meanwhile, the starving people sitting behind me have resorted to cannibalism.

Please tell my family that I love them.