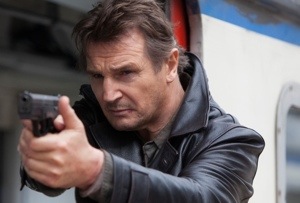 Hard to believe it was only six short years ago that Liam Neeson – the venerable over-sized veteran of prestige pictures and all-purpose blockbuster mentor-figure who always died early as part of The Hero’s Journey — made himself over as a scrappy, AARP-aged action star.

Nobody ever mistook the first Taken for anything but junk, mind you. It was a broadly xenophobic Daddy Knows Best fantasy in which an over-protective divorced father barnstorms his way across Europe, busting heads to protect and preserve his daughter’s virginity. But it was also a helluva alotta fun, and the biggest kick was watching Oscar-nominee Neeson bring his natural gravitas to a glorified Van Damme role.

Despite the off-brand, low-rent trappings of writer-producer Luc Besson’s EuropaCorp factory, Neeson never acted like he was slumming. Here was Oskar Schindler, Michael Collins, Alfred Kinsey and Ethan Frome himself — the guy described in Woody Allen’s Husbands And Wives as reading Yeats poems and weeping –suddenly kicking mass quantities of ass in a trashy movie that plays way better on cable when you’re half in the bag.

But Neeson didn’t condescend to the role. It was like watching Daniel Day-Lewis give his all to Under Siege 3.

Indeed, Taken was such a left-field box office bonanza that violent, modestly-budgeted Liam Neeson B-pictures almost immediately became a perennial cold-weather, off-season staple. Liam’s a genre unto himself these days, and the delightful surprise is that most of these movies range from pretty to very good.

Unknown and Non-Stop were nifty little potboilers, while Neeson did some of the best work of his career in vaguely disreputable, unexpectedly excellent efforts like The Grey and A Walk Among The Tombstones. (The financial failure of the latter adaptation still breaks my heart, as we’ll now be deprived of any sequels in which Neeson plays Lawrence Block’s Matt Scudder. This is why we can’t have nice things.)

In a vacuum of plausible action heroes, Liam Neeson almost singlehandedly brought back movies you go see with your Dad. Nobody’s wearing tights or capes and they’re the kind of no-bullshit pictures Clint Eastwood used to make before he started winning Oscars. (Worth noting here that Neeson’s big break was as a heavy in the final Dirty Harry movie.)

But what’s becoming increasingly obvious is that this new Liam Neeson genre has long since outgrown the franchise that spawned it. Taken 2 was a goof in the Die Harder vein, ramping up the absurdity to such cartoonish levels that I guess it was okay if you were as drunk as I was when I saw it. Taken 3 is just an abomination, one of the laziest, cheapest and all around lousiest cash-ins this side of Sandler’s Happy Madison productions. Everyone involved with this film should be embarrassed, and boy do they look it.

So once again we have Neeson’s Bryan Mills, that doting single dad with “a certain set of skills” still being a needy pest around his now college-aged daughter (Maggie Grace.) Bryan’s formerly frosty ex-wife (Famke Janssen) suddenly wants to get back together, but he brushes off her amorous advances during a fit of temporary blindness or insanity or I don’t know what. He tells her to hold off until she’s finished divorcing her sweaty, shitbag second husband (Dougray Scott) who I can’t recall being in either of the previous installments but apparently now is some sort of bad-dude arms dealer.

Next thing we know Bryan is quite sloppily framed for his ex-wife’s murder, but there’s no time for grieving Famke Janssen when we’ve got so many incompetently staged chase sequences to get through. Taken 3 is a bald-faced rehash of The Fugitive, with Forest Whitaker as the skeptical yet still all-business cop on Neeson’s trail. I love Forest Whitaker, but he’s no Tommy Lee Jones.

Wearing a distracting grey goatee that juts out like a phallic symbol while he snaps a rubber band around his wrist and fondles a chess piece he keeps in his pocket, Whitaker is so bogged down with actorly affectations and totems to play with during his dialogue scenes it’s a miracle he can remember his lines. (No reasoning for the rubber band nor the chess piece, by the way. This is just weird stuff desperate actors do to try and make expository characters more interesting.)

The central mystery in this movie doesn’t make any sense, like when barely forty minutes into the thing Neeson happens upon video evidence that will clear his name but chooses to fist-fight a swarm of cops instead of presenting it to them, or ever mentioning it again. I’m not sure what’s the point of remaking The Fugitive when the character is anything but one; instead he just nonchalantly breezes around public places – barely mentioned on the television news – and the sorry script (by Besson and frequent co-conspirator Robert Mark Kamen) always gives him every advantage.

There’s no tension in watching Mills try and live by his wits here because he’s being aided by a gang of ex-Special Ops golf-buddies who have apparently set up a secret, underground bunker just for this kind of occasion (in case they kill their wives, too?) where Bryan’s got access to a stash of cutting-edge technology and military-grade weapons. Worse than that, director Olivier Megaton blatantly cheats more than once by showing our hero being killed onscreen only to later reveal that Bryan miraculously survived with lame (or no) explanations.

For the first time Neeson looks bored as hell, going through the motions in his designer leather jacket with not a hair out of place, perfectly untroubled by the murder of his beloved and the nationwide manhunt chasing after him for it. Unlike the globe-trotting previous pictures, this one is confined to Los Angeles freeways, basements and parking lots, so there’s literally nothing to see here.

Taken 3 is a slapdash throwaway. Your Dad deserves better.