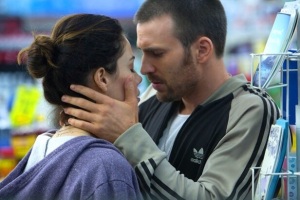 “Playing It Cool makes a pretty convincing argument against post-modernism. It assembles an enormously appealing cast then and proceeds to trip over its own shoelaces for an hour-and-a-half, while writers Chris Shafer and Paul Vicknair attempt to prove their smart-alecky superiority to the genre in which they’re working.” – Movie Mezzanine, 05/05/201