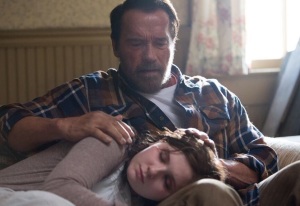 It was shortly after The Governator left office that I recall reading a rather horrifying article (I believe it was in Entertainment Weekly, as so many horrifying articles tend to be) detailing Arnold Schwarzenegger’s grand plans to resume his Hollywood career with a dismal-sounding slate of family-friendly projects, not the least of which was a children’s superhero cartoon he’d cooked up with Stan Lee. Of course, all that was before the maid’s baby scandal.

As a VHS-era brat who grew up on primo R-rated Ah-nald, I’ve always felt a bit betrayed by his kiddie-fare phase. I did not go to Schwarzenegger movies to see him co-starring in Christmas comedies with Sinbad, I wanted to watch him lie about promising to kill you last and then “hear da lamentations of de women.”

Despite the trauma this unpleasantness obviously caused his family, it was nonetheless a selfish relief for me when Arnold’s brazenly unapologetic (borderline-sociopathic, really) post-scandal 60 Minutes interview scotched his street cred with soccer moms and sent Schwarzenegger crawling back to the disreputable action movies from whence he came.

Too bad nobody else showed up. A box office non-event, Kim Jee-Woon’s The Last Stand was also a rather absurdly entertaining Rio Bravo riff with Arnold getting his Eastwood on as a cranky local sheriff who’s too old for this shit. Similar audience indifference greeted Escape Plan, which found Schwarzenegger taking a rare supporting role and stealing the entire movie out from under his former rival Sly Stallone. David Ayer’s Sabotage may indeed have been a toxic piece of garbage, but credit Arnold for pushing the outer edges of what was once such a carefully calibrated screen persona.

Schwarzenegger has seemed different since he’s (ahem) been back. He’s less a quipping, self-regarding colossus and more a humbled, (relatively) human-sized figure. Arnold appears hungry again, and open to trying new things. Maggie is his biggest gamble yet, the kind of indie where the entire production budget probably wouldn’t have covered the craft service expenses on one of his old blockbusters. This is a somber, deliberately paced family drama concerned with euthanasia, and Schwarzenegger plays it straight with a shockingly soulful, understated turn.

Oh yeah, and it’s also about zombies. Sort of.

Maggie begins after something called the “necroambulist virus” has already wiped out a good chunk of the Midwest. Eschewing the usual outbreak mayhem, the movie starts out with everyone having a pretty good handle on how this whole zombie apocalypse thing works now, with quarantine zones constructed for the infected. It’s an extremely slow-acting virus, taking up to six weeks before victims turn into flesh-eating monsters.

Schwarzenegger stars as a stalwart, Henry Fonda-ish widower named Wade Vogel whose dear teenage daughter Maggie (Abigail Breslin) has just been bitten. He brings her back to the family farmhouse and watches helplessly for a few weeks as his little girl deteriorates, trying to make the most of their dwindling time together. There’s no miracle cure on the horizon, just the question of whether Wade will eventually allow her to be taken away and put down by the authorities, or if he’ll be able to find it in him to do the job himself.

Arnold’s doing Eastwood again, and this is his Million Dollar Zombie.

It’s terribly sad, mostly because we’re not used to seeing Arnold Schwarzenegger powerless. (It feels wrong, in a most unexpectedly moving way.) He shrewdly underplays, radiating a gentle sorrow that’s all the more effective coming from such a brawny figure. Schwarzenegger and Breslin share some very sweet moments, and they’re good enough to make you wish the filmmakers had given them a little more to work with.

Screenwriter John Scott 3 (everything’s a franchise) and director Henry Hobson seem to be going for what David Cronenberg did with The Fly – using a fantastical sci-fi concept to address issues of illness and end-of-life decisions that audiences would probably never go see without the genre gimmick. But Maggie is not nearly as complex a film as The Fly (few movies are) and over time the narrowness of vision becomes something of a grind.

This is a seriously downbeat, morose movie with washed-out photography and a bleak, funereal score. Hobson’s commitment to hopelessness is admirable in theory but in practice it’s a drag. However well-played, one note is still only one note.

But I hope Maggie‘s lukewarm reception doesn’t discourage Schwarzenegger from seeking out more roles like this, the way Cop Land‘s failure sent Stallone scurrying back into silliness. It’s quite a thing to see the Austrian Oak playing a regular dad. Vulnerability looks good on him.