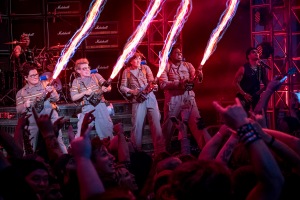 “It’s always the sad, pale ones,” sighs Kristen Wiig upon sizing up the porcine, basement-dwelling geek responsible for unleashing an apocalyptic flurry of the undead in director Paul Feig’s embattled reboot — a funny, goodhearted movie which under no circumstances should be this summer’s most controversial release. If you’re lucky enough not to spend much time on the internet then you’ve probably missed the past two years of incessant whining and misogynistic outbursts by man-babies –most pushing middle-age– for whom the very idea of ladies busting ghosts constitutes a hate crime worse than sketching dirty cartoons of their prophet, Slimer.

Ghostbusters, really? Yes, bafflingly enough there’s a noisy cult of creeps out there that considers the silly old movie sacrosanct and somehow this newfangled, feminist desecration is “ruining their childhoods,” which makes me think adulthood probably ain’t going so well for these dudes, either. You’d figure I’d be a prime nostalgia target, having seen the original film in theatres when I was nine years old (pretty much the perfect age for it) but like everybody else in my class, I quickly moved on to stuff like Stripes, The Blues Brothers and especially Animal House. Ghostbusters was a kiddie-movie gateway drug for the Not Ready For Prime Time Players, then you got a little older and watched the ones that had boobies and swear words.

Not so, I have learned, for a hopefully small but extremely vocal minority. I’m told a lot of this has to do with a Ghostbusters cartoon I never bothered with, one that apparently took quite seriously the Aykroyd-Aspergery gobbledygook mythology that Bill Murray spent the first picture rolling his eyes at. Whatever the case, bustin’ makes these lonely fellas feel good, as does the recording of epic YouTube manifestos and online harassment, sexual or otherwise. When comedian Patton Oswalt tweeted that he’d enjoyed the new film, fervent fanboys responded with cartoons of his recently deceased wife as a ghost being busted. I can only rest in the presumably safe assumption that there’s no danger of these pathetic little shits reproducing.

Feig’s girl-power Ghostbusters was forged in a crucible of man-baby cyber-bullying and it wears a chip on its shoulder proudly. Wiig, Melissa McCarthy and the monstrously funny Kate McKinnon star as three scientists mocked and run out of the university system for their belief in the paranormal. But when New York City (quite unconvincingly portrayed by Boston and Australia) suffers an outbreak of ectoplasm, who you gonna call? Leslie Jones soon joins the team as an MTA worker who’s an expert on ancient NYC architecture, and Chris Hemsworth plays a himbo receptionist so dumb he thinks he hears through his eyes.

Just like Feig’s Spy and The Heat, both of which also starred McCarthy, Ghostbusters is a movie about female professionals constantly being undercut and underestimated by moronic male gloryhounds who usually end up taking credit for all their work. There are some terrific numbskulls and naysayers here, including Andy Garcia as a vain NYC hizzoner who loses it if you compare him to the mayor from Jaws, and Zach Woods as a terrified tour guide who won me over in the opening scene by describing “a face bidet and an anti-Irish security fence.”

McCarthy doesn’t play crass or cloddish this time, anchoring the gang with a genuine sweetness that’s rather beguiling. Besides, her usual lumbering loudmouth shtick would starve for oxygen next to Jones, who can bulldoze anybody in her path and on a big screen seems to loom even larger than Hemsworth. Wiig wisely sneaks in underneath the others, stammering silliness with a lulling, impeccably timed monotone. But the movie is owned outright by Kate McKinnon, conjuring up an oddball gearhead with a gallery of lusty leers and a tickled self-amusement that rivals Murray’s in the 1984 original. You’ll find yourself scanning the screen for McKinnon during the wide shots, where she’s always doing something not-quite-right and absolutely perfect.

What makes Ghostbusters a pleasure to watch is how much these women obviously enjoy working with one another, generously feeding each other straight lines and setups as opposed to other comics who too often compete for attention. Feig’s films can get a little messy with the improv, but I find they’re all redeemed by a spirit of community. Like the unexpectedly hilarious Jason Statham in Spy, or Hemsworth here, everybody gets to be funny.

Alas, this is also a big-budget summer blockbuster, which means the third act of Ghostbusters must be dragged down into a boring CGI visual effects extravaganza that appears to have been edited with a meat cleaver, missing large chunks of crucial plot information perhaps best left on the cutting room floor. (One lengthy sequence even plays out beneath the closing credits. It looks expensive so I guess they didn’t want to waste it on the DVD because nobody buys those anymore.)

It’s ironic that all the cameos and callbacks to the original Ghostbusters are the gags that don’t land. (I wanted to say Bill Murray gives his unfunniest performance since The Razor’s Edge except I tried to watch Rock The Kasbah on Netflix the other night. Jesus.) Feig and his co-screenwriter Katie Dippold crafted a ready-made metaphor when the ladies are almost asphyxiated by a gigantic, inflatable Stay-Puft marshmallow man, suffocating under the weight of a legendary, inimitable punchline. You’ll wish they hadn’t bothered trying to provide fan service for a fanbase that had already decided to hate this movie before a frame was even shot.

And yeah, there were a few of those guys at my screening. One fat thirty-something lost his mind and started shouting obscenities at the screen when the gals used their proton packs to blast a bad-guy ghost in the balls. (Oh, the misandry.) Then there were a couple of bros circling the parking lot in a jeep afterwards, hollering “Ghostbusters sucked!” at people leaving the theater.

With everything going on in the world right now I almost envy their comical lack of perspective, getting so worked up because human beings with vaginas are starring in a remake of a movie you liked when you were a little kid. Of course, these dumb motherfuckers all paid for tickets to come see it tonight and yell, so maybe we should just feel sorry for the sad, pale ones.