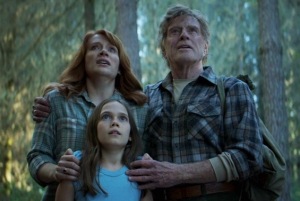 It’s been a great summer for gentle, handcrafted family films that nobody can be bothered to go see. The BFG and Hunt For The Wilderpeople were plowed right over at the box office by noisy, talking-animal contraptions and I worry the same fate may befall Pete’s Dragon, director David Lowery’s in-name-only remake of the cacophonous 1977 Disney musical animation-hybrid. Slender where the original was bloated, beguiling in its plainspoken simplicity, were it not for the cutting-edge special effects this picture would feel like it was discovered in a vault somewhere from another era. Unlike the old Pete’s Dragon, the new Pete’s Dragon is folksy, sincere and altogether lovely.

Set in an unspecified time back before cell phones and screens took over our daily lives, the film stars Bryce Dallas Howard as a forest ranger in the Pacific Northwest. One day while keeping a wary eye on a logging company run by her fiancée (Wes Bentley) and his blustery brother (Karl Urban) she happens upon ten-year-old feral kid Pete (the excellent Oakes Fegley) who has been fending for himself way out in the woods ever since a car accident killed his mom and dad some six years ago. (It wouldn’t be a Disney movie if it didn’t open with a traumatic parental death scene. You’ve been warned.)

Of course it’s impossible for a child to have survived out there for all that time on his own, and we’re lucky enough to have seen that Pete was taken in by Elliot, a galumphing, fuzzy green dragon with a broken tooth and an incredibly endearing personality. One of the things that makes Pete’s Dragon so unusual is that Lowery isn’t in any particular hurry here. The film reminded me of The Black Stallion in its almost antediluvian patience, allowing us to observe the bond between the boy and his special friend. This isn’t a movie heavy on incident, you just kind of hang out with everybody for a while.

Naturally the discovery of young Pete brings up a lot of questions about what’s really going on out in them woods, but in a nice change of pace there aren’t any villains to be found. (Usually movies like this have a moustache-twirling land developer or somesuch doing dastardly deeds to goose the plot along.) Folks here are just trying to do right by each other in a frankly incredible situation. Sure, conflicts arise, but they feel organic to the story and not just ginned up to kick off meaningless action sequences at predetermined intervals. Pete’s Dragon might be modest in scale, but when stuff goes down it means far more than those rattletrap chases of the increasingly exhausted Pixar formula.

Indie stalwart David Lowery is probably best known for 2013’s Ain’t Them Bodies Saints, a Sundance award winner about as mannered as its title and so indebted to Terence Malick it felt like movie karaoke. Despite predictably fine performances from Casey Affleck and Ben Foster, the film was so festooned with frilly cinematic frou-frou that you had to strain to see the drama buried underneath all the affectations.

With Pete’s Dragon Lowery takes the opposite approach to marvelous effect. This is just straightforward, clean craftsmanship. (Sometimes it feels like Clint Eastwood directed a children’s picture.) He gets wonderfully unguarded performances from kid actors Fegley and Oona Laurence, supported by Bryce Dallas Howard and Robert Redford in fine form. What the adults are doing here is trickier than it looks, planting their feet and playing forthright decency and kindness. Redford especially has a twinkle in his eye as a man who spent most of his life written off as a fool because he never stopped believing in magic. You’ll want to believe, too.