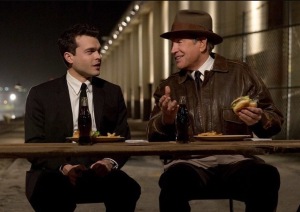 “Why do Baptists hate fucking? Because it might lead to dancing,” quips a sleazy chauffeur played by Matthew Broderick in the best line of Rules Don’t Apply, writer-producer-director-star-icon Warren Beatty’s woozy, wobbly Howard Hughes biopic that’s been in various stages of production for at least a decade, and might even be finished in another few years.

Released to ignominious box office over Thanksgiving weekend – I had the very Hughes-esque experience of watching it alone in an empty theatre and was tempted to piss in my empty soda cup for the full effect – the film is a frustrating farrago of half-baked ideas and weird, romantic notions. Cut within an inch of its life, the breathlessly paced Rules Don’t Apply feels like a hasty assembly of scenes crammed together like sardines. There are at least half a dozen movies going on here at the same time but Beatty can’t seem to make up his mind what any of them are supposed to be about.

Set in 1958, the film follows plucky young Marla Mabrey (Lily Collins), a beauty pageant winner brought out from Virginia to join Mr. Hughes’ stable of starlets and screen test for a role in his upcoming opus. In addition to lavish accommodations overlooking the Hollywood Bowl, devout Baptist Marla and her disapproving mother (Annette Bening) are assigned a driver. Fresh-faced Frank Forbes (Alden Ehrenreich) is a fine young Methodist boy who follows his employer’s instructions to the letter, including an order to slow down for bumps in the road so as not to jostle his precious cargo’s lady parts. Mr. Hughes’ rules prohibit any fraternization between chauffeurs and actresses, but after about thirty seconds of the sparkling chemistry between Collins and Ehrenreich it’s obvious that sooner or later the picture’s title will come into play.

Turns out to be a lot later than you may have hoped, thanks to the billionaire himself, who doesn’t appear for the film’s first half-hour and then promptly takes over the movie. Played by Beatty with that addled air of distraction he so often spins into comic gold, Hughes is the most avuncular of megalomaniacs. Already deep into dementia but notably missing any of the real-life subject’s viciousness and racism, Beatty’s aviator is more like a kooky, rich uncle that the movie indulges beyond all reason.

Rules Don’t Apply seems to find it adorable when Hughes lords his wealth over his subjects, tormenting them with demands for vast quantities of obscure ice cream flavors and demeaning procedures like making his actresses line up and jump for paychecks dangled out a window on a string. I thought it was all kinda gross, but maybe I’m just not in the mood to laugh at the lovable eccentricities of an unstable, narcissistic billionaire right now. (At one point Marla tells him, “Mr. Hughes, I think you should be president.” This presumably would’ve elicited a huge groan from the audience had there been anyone else in the auditorium.)

Pointedly set during the year a young Warren Beatty first arrived in Hollywood, there are all sorts of personal totems floating around the movie, with more than a hint of the reclusive filmmaker burnishing his own legend by playing a famously withdrawn, pussyhound genius. Broderick’s Baptist joke speaks to a recurring fixation on religion, as repressive social mores of the fifties are about to topple and wholesome, church-going kids like Marla and Frank find themselves dipping their toes in Hollywood decadence. Beatty’s 1975 classic Shampoo (which he wrote with Robert Towne) takes place just ten years later –though it feels like a thousand– and conjures the cultural turning point Hunter Thompson famously described as “that moment when the wave finally broke and rolled back.” Rules Don’t Apply tries to take a similar sort of sociological snapshot, but it never comes into focus.

All the pre-release materials I could find listed this film’s running time as two hours and thirty-eight minutes, yet the version currently in theatres runs a half-an-hour shorter than that. With four credited editors, it’s clearly been pureed – cutting away from scenes the very split-second words escape the performers’ mouths and sometimes even before. There’s no breathing room nor any clear direction, just a cacophony of incidents crashing into one another. I’m not sure what exactly happened behind the scenes here, but the movie sure doesn’t feel like it’s finished.

Collins and Ehrenreich’s beguiling love story takes a backseat to tired Hughes antics with TWA and a cavalcade of head-scratching cameos. (What the hell are Ed Harris and Amy Madigan doing here? Is that Steve Coogan? And I guess you’re just not allowed to make a Howard Hughes movie without Alec Baldwin.) The most fully realized performance turns out to be Broderick’s lecherous loser, which is a treat because too few filmmakers tap into the darkness beneath his sad-frog exterior. Beatty’s Hughes could have used some of that darkness. From Bonnie And Clyde to Bulworth he’s never been known for taking it this easy on his characters, even when giving himself too many flattering close-ups.

As far as late-period auteurs getting lost in the weeds of their material go, Rules Don’t Apply has a lot of the same muddled, perplexing qualities of James L. Brooks’ How Do You Know, which found a weirdly devoted cinephile cult in the years following its similarly delayed and disastrous 2010 release. Who knows? Maybe this one will, too.