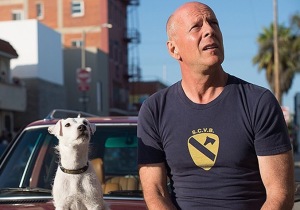 Once upon a time he was my favorite movie star, but it’s been difficult to follow the career of Bruce Willis as of late. Most of the time mean-mugging his way through paycheck roles in cruddy VOD action movies, his sour and grouchy late-period screen presence suggests a guy who doesn’t like himself very much and his chosen profession even less. These barely-released cheapies all seem to boast generic titles like Vice, Precious Cargo or Extraction with interchangeably frowny-faced Willis performances so enervated you can even see how bored he is on the posters.

One good thing I can stay about Once Upon A Time In Venice, a complete shambles of an action-comedy co-written and directed by Willis’ Cop Out producer Mark Cullen, is that the star is awake and enthusiastic in ways we haven’t seen in ages. (I’m reminded of a review in which my pal Matt Prigge praised “an unusually alert Robert De Niro.”) Willis is playing comedy again, or at least trying to – winking and bouncing around as a beach bum private dick who’s always wearing shorts and a smirk. It’s hardly the return of Bruno, but speaking as an ’80s kid who wanted to be David Addison when he grew up, I enjoyed watching Willis be obnoxious again.

But the fun stops there, as Cullen’s screenplay (written with his brother Robb) hog-piles so many characters and conflicting plotlines that I at first assumed it must be badly adapted from a labyrinthine novel. It isn’t, this is just incoherent writing. Willis’ wiseass private eye winds up on the wrong side of a local drug kingpin (Jason Momoa) while also doing a terrible job investigating some elaborate vandalism cases at the behest of Adam Goldberg’s penny-pinching real estate mogul — who calls himself “Lew The Jew” in what the Cullens seem to think passes for Tarantino-esque wit.

For reasons I still cannot ascertain, Willis has been bogged down with a breathtakingly unfunny protégé, charmlessly played by Silicon Valley’s Thomas Middleditch. The kid gets saddled with ungainly narration trying to tie the disparate story threads together, doing actual detective work while his boss would rather be hanging out with John Goodman’s depressed surf shop owner. Goodman is a gas here, semi-suicidal after a recent divorce and asking to tag along with Willis on increasingly dangerous assignments “because hey, maybe I’ll die?” The two veterans of ABC’s primetime comedy lineup have a natural, easy rapport and I spent most of the time wishing I could be watching them together in a better movie.

Once Upon A Time In Venice is so disjointed that the motor for most of its plot –the abduction of Willis’ daughter’s dog—doesn’t happen until more than forty minutes into the ninety-minute picture. It’s such a clutter of introduction scenes and abandoned story points that the film even ends in medias res. You leave with a lot of questions, first and foremost being: Bruce Willis woke up for this?