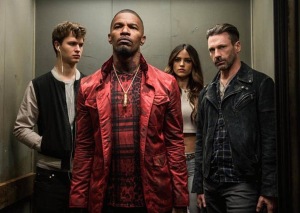 “I found the movie’s slick, shiny surfaces entertaining to a point but once again wish this frustrating filmmaker would go as deep as his debut. He’s made enough movies about babies. Maybe the reason Hamm’s performance stands out so much is that he’s the first character in an Edgar Wright film who’s an actual adult.” – WBUR’s The ARTery, 06/29/2017