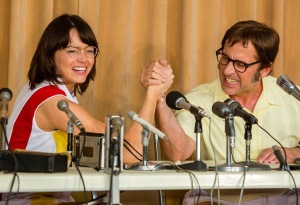 There’s a marvelous bit of blocking about two-thirds of the way through Valerie Faris and Jonathan Dayton’s Battle Of The Sexes, as Steve Carell’s blowhard, over-the-hill tennis champ Bobby Riggs sets out on his way to a 1973 exhibition match against female superstar Billie Jean King.

Riggs’ semi-estranged son –a hesitant blank of a character played by Lewis Pullman– abruptly decides he’s going to stay and watch the match from their hotel, abandoning his father at the top of the escalator. Carell spends their conversation casually walking up the down escalator, a nifty visual representation of the desperate sad sack’s sinking psychological state. At the end of the scene the camera flips to Riggs’ point-of-view, watching his son disappear from sight.

This is smart filmmaking, using the camera as tool with which to tell a story instead of just recording one. Unfortunately the scene still doesn’t mean anything to us because Riggs’ son is such a cipher, just one of many moments in which Faris and Dayton’s fine direction is sold down the river by an atrocious screenplay from Slumdog Millionaire scribe Simon Beaufoy. Battle Of The Sexes is a terrific-looking movie photographed with intelligence and written in crayon.

It’s hard not to groan out loud at a line like that. It was even harder for me not to long for screenwriters Scott Alexander and Larry Karaszewski, who with The People Vs. Larry Flynt and last year’s amazing American Crime Story: The People Vs. O.J. Simpson managed to locate the cracked humanity inside similar media circuses while letting the larger sociological issues emerge organically. Forgive my lack of a tennis metaphor but they could have knocked this thing out of the park.

A brief, affecting affair between Stone’s Billie Jean and her hairdresser (Andrea Riseborough) flickers with sensuality and excitement before the movie returns to its regularly scheduled underdog uplift. There’s a much tougher, messier movie to be made about King’s struggles and achievements. Faris and Dayton could probably do a good job directing that one, too. They just need to find another writer.