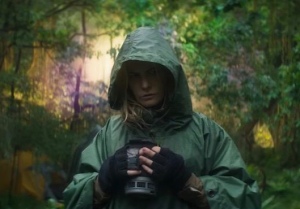 I suppose it’s my job to be the big smarty pants who has everything figured out, or at least can fake it convincingly enough to fill six hundred words or so. I also suppose that if I went and saw Alex Garland’s Annihilation for a second time –maybe earlier in the evening when I’m not completely exhausted and half in the bag– I could probably come home with all sorts of theories about what’s really going on here, paying particular attention to those disappearing and re-appearing tattoos and sussing out the film’s fractured timeline into some sort of unified, coherent thesis explaining this strange and mesmerizing movie for you.

But I don’t really want to.

The best parts of Annihilation felt like I was having a nightmare right there in the theatre — the cutty, elliptical storyline making abrupt logical and temporal leaps while providing oddly unsettling visual sensations with little or no explanation. The template for the modern science fiction film makes sure to tell us everything you’re looking at while we’re seeing it. Annihilation is more like (if I may quote Jim Croce) a jigsaw puzzle with a couple of pieces gone. It’s got that dreamy, vaguely incomplete feeling that made the first Blade Runner haunt you for ages afterwards. I’m not exactly sure what to make of this movie but I can’t seem to shake it.

Natalie Portman stars as a biologist leading a team of female scientists into something called The Shimmer – a slowly expanding meteor crash site surrounded by a sort of trippy, shiny soap bubble inside of which electronics and compasses don’t work. Time seems to be on the fritz in here too, as on the first morning our gals wake up six days into their journey with no memories of arriving. Portman’s hunky husband (Oscar Isaac) is the only explorer who has ever emerged from The Shimmer alive –he spent a week there one year—and the dude came home decidedly far from okay.

Each of these women is emotionally broken in some fashion, recruited for that very reason by Jennifer Jason Leigh’s faintly sinister psychiatrist, Dr. Ventress. (It’s natural to be wary when someone like JJL is playing a mental health professional.) The crew is rounded out by Gina Rodriguez, Tuva Novotny and the achingly vulnerable Tessa Thompson – so brash and indomitable in films like Dear White People and Creed, yet here so delicate I kept hoping she’d turn around and go home instead of facing whatever horrors lie ahead.

A probably unnecessary framing device lets us know Portman is the only one getting out alive, further confounding the movie’s chronological chop-suey as she provides cryptic non-answers to Benedict Wong’s Hazmat-suited inquisitor. What we do discover is that The Shimmer works as a prism not just for the gorgeous striations of light inside but also bending and mixing the genetic material of its inhabitants, conjuring wonders like elk with floral antlers and terrors like toothy bears that cry out in the voices of their prey.

It’s a nifty thematic match for how Garland is recombining the DNA of seemingly incompatible sci-fi movies from Aliens to Stalker or the alternating of his flatly functional relationship interludes with wild, hallucinatory episodes. (I haven’t read Jeff VanderMeer’s novel on which the film is based, but enough fans are bitching online for me to surmise the film has taken considerable liberties with the source material.)

I’ve enjoyed Garland’s screenplays for 28 Days Later and Dredd while remaining an agnostic about Ex Machina, his highly touted directorial debut that felt to me like the Voight-Kampff scene from Blade Runner plus nudity, stretched out to two hours. Annihilation is the real deal, though. However frustrating, this is the product of a genuine, gonzo vision. I still can’t believe a major studio released this thing into multiplexes.

The movie exists inside a depressive murk — a muted torpor that mirrors these women’s private sorrows. As Garland’s film crept up on its psychedelic light-show finale, the movie it reminded me of most was Lars Von Trier’s masterpiece Melancholia, which greeted the apocalypse with a sigh of relief.

Annihilation’s cryptic coda is all but begging to be unpacked and picked apart, yet once again I’d rather just sit and be haunted by these pictures and sounds, letting the film wash over me like a terrible, beautiful dream. Sometimes understanding stuff is overrated.