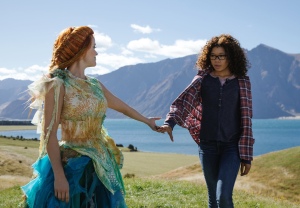 Tempers are running pretty hot around this one on social media so let’s start where we can all agree: Director Ava DuVernay becoming the first woman of color to helm a $100 million blockbuster is an important landmark in movie history that took entirely too long to happen. Additionally, DuVernay’s decision to change the lily-white protagonists of Madeline L’Engle’s 1962 novel to a mixed-race family is an admirable one, and I dearly wish more movies today were cast to look like the world in which we live. The very existence of A Wrinkle In Time is a big step forward for an industry often content to lag far behind the times. That the film got made at all is cause for celebration.

Alas, that’s where the party ends.

I really hated watching A Wrinkle In Time, and by this I don’t mean that I hated the story (what I could glean of it) or the characters, but rather that I hated the physical act of looking at the movie and trying to follow the visual information as presented onscreen. DuVernay and cinematographer Tobias Schliessler have shot the film almost entirely in disorienting close-ups and cut them together in a willy-nilly fashion that cares fuckall for spatial relations. It’s so visually incoherent that the gigantic IMAX presentation made me nauseous, and this isn’t exactly a movie with a lot of fast-paced action. In fact, most of it consists of folks standing around curiously empty sets explaining the plot to one another.

I never read the L’Engle book but from what I can tell this is the largely interior journey of a sad little girl (played here by talented young Storm Reid) discovering the secrets of the universe after her NASA scientist father (a terrific Chris Pine) gets himself stuck in another dimension. With the help of her oddball little brother (Deric McCabe) and a neighborhood boy with a crush (Levi Miller) our heroine is able to traverse the galaxy and defeat some sort of fiery octopus monster by using the power of her newfound self-esteem. Or something like that, I think.

Pretty sure this is one of those adaptations where everything’s 100% clear if you’ve read the novel and the rest of us are left out in the cold. (Although I’ve heard the book described as “unadaptable” so who knows?) It certainly feels like there’s a lot more going on inside the characters’ heads than ever gets dramatized onscreen. Anyway, I was having a hard enough time trying not to toss my cookies from the crazy edits while recoiling from the garish production design, gaudy costumes and a Resse Witherspoon performance so uncharacteristically terrible I’m still trying to figure out what went wrong there. (I mean Jesus, the woman was even brilliant in Little Nicky.)

And that’s all before Reese spins around, strips off her clothes and transforms into a flying heart of Romaine lettuce.

Witherspoon, Mindy Kaling and Oprah Winfrey show up as spiritual beings who kick off the story – think the three witches from Macbeth after a fancy church rummage sale and a visit to the junk jewelry shop. With a cheeky nod to her oversized offscreen superstardom Oprah’s bigger than a damn house. Winfrey is quite a gifted actress who was robbed of an Oscar nomination a few years back for Lee Daniels’ The Butler, but she doesn’t act in this movie so much as she hosts it, standing off to the side and announcing all sorts of empowering, self-help affirmations that sound like they’re straight out of O magazine.

Indeed, much of A Wrinkle in Time’s dialogue is feel-good slogans with the supporting cast constantly complementing our heroine for being so much braver, smarter and better looking than she thinks she is. I’m sure DuVernay did this to try and inspire young female viewers but after a while it started reminding me of one of those Mark Wahlberg movies where he can’t walk down the street without people stopping to tell him what a great guy he is.

Then again, I was already grouchy and over-agitated by close-up shots like the ones of the mean girl nemesis glaring down from her bedroom window at our protagonist’s backyard. Or at least I think that’s where she is. There’s no establishing shot to orient us in the scene, and we never see the rest of her house to get a bead on where the bully is in relation to the yard she’s supposedly glowering at. None of the actors’ eyelines match so that’s no help either, and suddenly I realized how discombobulating it would probably be to try and watch The Room in IMAX.