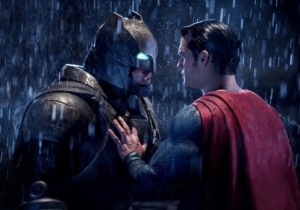 What a couple of assholes.

A singularly joyless and often downright miserable affair, director Zack Snyder’s $250 million franchise launching-pad seeks to do for DC Comics what The Avengers did for Marvel, rounding up the most recognizable intellectual property currently owned by Warner Brothers for one of those “shared universes” that are all the rage in executive boardrooms these days, with the intention of spawning sequels and spin-offs until the cows come home, the contracts run out or audiences finally decide it’s time to put away childish things.

Much like Sony’s woebegone The Amazing Spider Man 2, Batman V Superman: Dawn Of Justice is a movie far more concerned with setting up future installments than it is in telling the story you paid to see tonight. The film even has the temerity to include a scene in which a character sits down at a computer and watches what amounts to three trailers in a row for your next several years of summer blockbusters. (It says something dire indeed about the picture that this is one of its least offensive qualities.)

We pick up eighteen months after Man Of Steel’s questionable finale laid waste to Metropolis, and folks still haven’t quite figured out how to feel about Superman. Apparently I enjoyed that 2013 film more than most, taken as I was with Henry Cavill’s young Kal-El torn between the wishes of two fathers — one who wanted his son to inspire the world and the other who would literally die to keep him hidden from a frightened population he was sure would kill his illegal alien child. I also liked Russell Crowe flying around on a giant dragon and was disappointed when a thoughtful movie disintegrated into dudes punching each other into buildings for what felt like months.

Dawn Of Justice doubles down on Man Of Steel’s queasy 9/11 imagery with a ground-level flashback to that big battle as Bruce Wayne (played by Ben Affleck, as you might have heard) watches his employees die horribly when the Wayne Enterprises building is reduced to rubble. Beefy and gray around the temples, this is a slightly older and much meaner Batman than we’ve seen before — haunted by a dead Robin, routinely awakened by disturbingly Freudian night terrors and he even brands the bat insignia into the skin of sex offenders to make sure they’ll get murdered in prison. Fun stuff, eh?

Bruce has got a huge hard-on for the Last Son of Krypton, because how dare someone so powerful act without any oversight? Meanwhile Clark Kent is pounding out editorials at the Daily Planet decrying this costumed vigilante of Gotham City for the very same reasons. Methinks the ladies doth protest too much and these boys should just get a room, but a billionaire tech bro with daddy issues named Alexander Luthor Junior (Jesse Eisenberg, in an extremely unfortunate performance that doesn’t seem to have been directed in the slightest) wants to make them fight because… well I guess he has his reasons.

Spectacularly incoherent, the first ninety minutes or so of Batman V Superman should be taught in film schools as a cautionary lesson in how not to edit a movie. Scenes from wildly different time periods and divergent moods slam into each other with little rhyme or reason, cut so severely there aren’t any transitions nor even much in the way of establishing shots. It’s just a huge jumble of data that I imagine will be baffling to anyone who hasn’t read too many comic books. Hell, I grew up on this stuff and I couldn’t tell you what the fuck was going on most of the time.

What I can tell you about is the tone, which is a bit like going to a funeral except without the laughs. Batman V Superman: Dawn Of Justice is a very, very, very, very serious film. The score (by Hans Zimmer and Junkie XL) throbs with heavy drums and mourning choirs, as our two dumbass heroes are duped by a twitchy millennial into going mano a mano in a Kryptonite-assisted fist-fight that prompts a bunch of self-conscious Renaissance painting tableaux (this is a Zack Snyder film, after all) but doesn’t really have much to do with the overall story, as it were. Like in Man Of Steel, a lot of interesting thematic questions about power and accountability are introduced and then take a backseat to a game of Punch-Out.

This movie made me feel bad. It’s terribly frustrating to watch these two icons of our collective childhood spend the entire movie up in each other’s grills acting like a couple of nostril-flaring dickheads. Especially when you know the whole time they’re being suckered. Cavill is catastrophically pouty and smug, while Affleck avoids embarrassment simply by shutting up, moving his face as little as possible and allowing his hulking frame to be maneuvered by Snyder into some admittedly badass poses.

But mostly I just didn’t like these guys, at all. (Which is saying something, considering that they’re goddamn Batman and Superman and I used to run around the house in Underoos pretending to be both of them.) The movie has a bullying, hostile tone that comes through in the surly performances by the leads, a callous indifference to innocents killed, and the general philosophical disposition of a teenager who just discovered Nietzsche after being grounded.

Dropped into all of this mess at the end, without much explanation is Gal Gadot’s Wonder Woman. She has nearly nothing to do, a handful of lines and was obviously shoehorned into the movie late in the midst of a chaotic production. But what a blast she’s having! Barging her way into the final action scene heralded by out-of-nowhere wailing guitars, interrupting these boring little twerps and all their morose self-pity, taking a punch from Secret Spoiler Bad Guy with an instantly iconic “Oh, now you’re in trouble” smirk.

I’ll spare you a Waiting For Gadot joke, but next summer’s Wonder Woman movie might begin to make amends for this debacle. Just so long as no whiny boys are allowed.