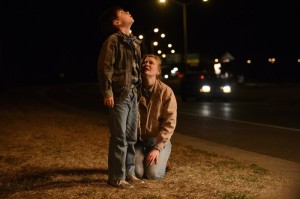 Creative writing instructors often tell their students to try and begin a story as far into the action as possible. Jeff Nichols’ Midnight Special begins even later than that, dropping us in around what might be the midpoint of most other movies and asking the audience to play catch-up for the rest of the running time. At first this is a thrilling proposition: In a franchise era besotted with backstories we’ve become so accustomed to preludes and prologues that the stark immediacy of Nichols’ opening sequence feels like a friendly jolt.

Two men careen down the highway in a muscle car with a creepy-looking kid wearing swimming goggles in the backseat. They’re obviously running from something or somebody, but we don’t know who or what. We hear an Amber Alert go out for the boy. These guys have a police scanner, bulletproof vests, and they’ve even packed night vision gear so they can speed through the darkness without their headlights on. Cue the opening title.

This is a hell of a way to start a picture, but it also writes a check that the rest of Midnight Special can’t cash. For awhile there’s an intellectual excitement to the process of watching the film — crucial plot information trickles out in dribs and drabs, but never in expository scenes for the benefit of the audience. Folks in this movie tend to talk like there isn’t a camera around, referencing things we don’t know about and nodding somberly. I’ve never seen a picture in which so many people use the word “it” on so many occasions without offering us the slightest clue what “it” is they’re referring to.

After some detective work we surmise that the men in that speeding car are Roy (Michael Shannon) and Lucas (Joel Edgerton), old childhood friends who have just sprung Roy’s son – that would be the kooky kid with the eyewear – from some sort of doomsday cult run by Sam Shepard. The FBI has gotten involved, and now the NSA is here too in the form of a hunky-dorky investigator played by Adam Driver playing Jeff Goldblum.

The child, named Alton, is unique in ways that seem to shift according to the demands of Nichols’ screenplay. He’s allergic to sunshine but can shoot bright beams of light from his eyeballs that induce some sort of ecstatic hallucinations in bystanders. He hears radio waves in his mind and turns green grass brown just by standing on it. Most alarmingly, Alton can bring spy satellites crashing to Earth when he gazes up intently at the night skies.

The slow-drip plot mechanics lead us to assume all our questions will eventually be answered, but what makes Midnight Special so damn frustrating in the end is that most of them aren’t even asked. For reasons never explained, Shannon and his wife (Kirsten Dunst) need to bring Alton to a set of specific geographical coordinates that have already somehow been figured out by Driver in a eureka moment that doesn’t make a lick of fucking sense. (He literally circles numbers on a dry erase board and we are left with no idea how he arrived at this discovery that the entire climax of the movie hinges upon.)

Basically, Nichols has Frankensteined the scripts for Close Encounters and E.T. with a little bit of John Carpenter’s Starman thrown in there for good measure. (Not for nothing is Shannon’s true-believing, half-mad Dad named Roy, and I’m pretty sure Driver recites one of Peter Coyote’s lines from E.T. verbatim.) But Midnight Special lacks the warmth that made those earlier pictures soar. This is a glum bit of business, with a few more nods to the original Terminator movie than were perhaps necessary. What’s also missing is a sense of wonder.

I enjoyed Jeff Nichols’ 2013 breakthrough hit Mud, but one must admit that for a movie starring Matthew McConaughey as an escaped convict living on a boat that’s stuck in a tree while embarking on a foolhardy chivalric quest, his meat-and-potatoes shooting style was a bit prosaic for the material. Midnight Special suffers from a similar flatness, along with some tragically underfunded special effects.

At least the acting’s swell, with Michael Shannon and Kirsten Dunst filling up all those pregnant pauses with layers you won’t find anywhere on the page. I’m not sure that scary Shannon was the optimal choice for a guy who is supposed to symbolize pure paternal love, but then again maybe that’s what makes him so fascinating. Roy’s final moment with Alton has a sudden, stinging gravity and is one of the few in Midnight Special that can be called understated instead of just underwritten.