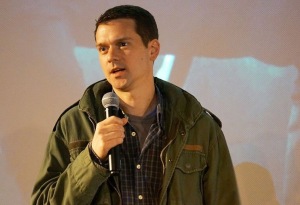 Last week the good folks at IFFBoston’s Screening Series brought writer-director Jeremy Saulnier to the Coolidge Corner Theatre for an early peek at Green Room, his new white-knuckle thriller about a punk gig gone horrifically awry. After the show, the Blue Ruin filmmaker took questions from a rattled crowd. Here are some edited highlights of the conversation:

The music was locked and loaded for twenty years. It’s mostly my friends’ high school bands. I was involved in the hardcore scene in Washington D.C. and in my suburban home of Alexandria, VA. The Ain’t Rights, the fictional band, they’re named after The Ain’t Rights, which is my friend’s band that just dissolved about a year and a half ago. There’s a real Tiger, there’s a real Sam. Pat and Reece are sort of hybrid characters based on my experiences and those of my friends. So it was very close to home, some kind of archive of my history in the punk rock scene in the mid-nineties. The music is something I wanted to finally put onscreen. The Ain’t Rights perform two songs that were written by my high school friends, and a Dead Kennedys cover.

I was a skateboarder back in the early eighties. We’d be around older kids, cooler kids, and see what T-Shirts they were wearing. Then I’d go home and ask my mom to drive me to the record store, try to remember the name of the band, pick it up, purchase it blind, take it home, unwrap the cassette and play it and think: “This kinda sucks. I don’t know if I like it.” But once we got our driver’s licenses we could go across the Memorial Bridge from Alexandria to Washington D.C. and I saw the real hardcore scene, the birthplace of hardcore. I wasn’t like a guru. I don’t have a whole closet full of vinyl and seven-inches. But I was certainly there and witnessed it and loved being part of it.

That’s a theme of the movie – how you got music, how you acquired it, you had to show up. Even to buy it, you couldn’t click on anything. For me the experience was very physical, very athletic. I was kinda like a shitty athlete with no sport. When skateboarding transitioned –I was pretty fucking good as a kid– but skateboarding as a sport evolved and got very technical. And I sucked. So I had to find something else to do. I was part of a hardcore band as well. I couldn’t play. I was pretty not talented. So I yelled into a microphone and worked out six days a week.

Not in my comfortable suburban enclave, but in D.C. every single show — Nazi punks. And the thing about them, just their presence attracted violence. They were more often than not the victims of violence because they weren’t welcome. They show up in uniform. They have insignias. They’re soldiers and they want to be identified like that. They’re natural bad guys for the movie, not just because of their ideology but because they’re separate, yet part of the world. I was never really in dangerous situations other than one time at a show there was a non-fatal stabbing outside of a club and they shut it down. I was like fifteen or sixteen and I was definitely scared shitless. I was very much observing people who were much harder than me doing tough things. It was good to finally archive that.

How did your background shooting commercials influence your filmmaking?

I wouldn’t call them commercials. I made corporate videos. I keep thinking of Martin Sheen in Apocalypse Now: “Saigon. Shit. Every day I’m in this hotel room I get softer. Charlie’s getting harder.” I was so fuckin’ soft. We made glorious talking head videos. It was really shitty. Once in a while we’d get saturated with nonsense and go do a short film or our first feature together. Finally though, it paid off because the corporate videos were lame, but I really liked just doing portraiture and at a certain point cameras got cheaper and they started to look really good. I got some jobs elsewhere where we were doing these really on-the-fly, minimalist camera setup jobs where I’d be going to IBM Headquarters to do architectural cinematography with a Canon 5D and a five-foot slider, just a backpack and a tripod. That new skill-set with teeny-tiny cameras that looked really, really big completely dictated how I shot Blue Ruin. I used the same kind of setup: five-foot slider, small Canon camera with still lenses. We could move lightning fast and I was finally able to incorporate these techniques into making cinema.

About that nightclub where all the mayhem takes place…

Blue Ruin was designed to incorporate locations I had access to through friends and family, and the blue sedan that was sitting in my parents’ driveway at the time. Green Room required something very different. I’m used to the indie film world and having to deal with nothing but downward pressure and restraints, so after getting over the guilt of having someone build this entire set it became the only solution. I realized it would be less trouble to build an entire concert venue inside a soundstage than it would for me to rewrite the entire script to fit some location. I couldn’t translate it. I had to force it into existence and that was great. And once we did that we spent a little more money than we should have, but it was totally worth it because now we had complete and utter control of our environment. That was kind of like a new cushy experience, although I did see the crew getting a little lazy toward the end.

Any trouble from the MPAA over the rating?

No, it’s a hard R. Now if I had the gall to show a penis or a vagina it would be NC-17. But if you gut someone it’s just a hard R. Actually I was pleased, because you see PG-13 movies with like 400 people dying and I think it can be argued that it’s more responsible to show violence in a way that really ends up being a gut-punch. The reason you’ll see a full frontal shot of someone being gutted, it’s very purposeful. It’s to see through the eyes of the person that’s becoming a killer and doesn’t want to be, and is brutalized by the experience. There are a couple of gratuitous close-ups for non-fatal wounds, but there’s a certain amount of reverence when characters actually die. It’s a narrative tool for shock but not just for shock value. It’s to heighten the experience.