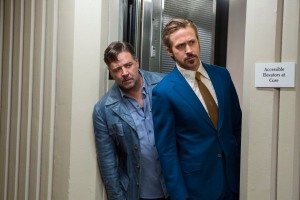 It’s late at night and a pubescent boy is sneaking a peek at one of his dad’s nudie magazines. The kid’s attention remains rapt, but we in the audience notice some movement off to the left of the frame, just outside the window. Far away, then quickly getting closer – it’s a convertible careening off a cliff, down the Hollywood hills, and at the wheel is the spank-rag’s cover girl, porn star Misty Mountains. The car crashes though the house, depositing dear Misty dead in the yard, splayed out all bloody and naked on the hood of her automobile like a ghastly mockery of a pin-up calendar.

The kid (presumably now destined for a lifetime of therapy) drops the magazine and guiltily covers up our deceased bombshell’s exposed breasts. This eyebrow-raising opening scene serves as The Nice Guys’ sly visual precis: foretelling a mystery under a dilapidated Hollywood sign, involving exploited women strewn about the twisted wreckage of the auto industry and compromised losers making a last stab at chivalry, even though they know it’s too late. In other words, this is a film by Shane Black.

Kicking off with a dead-naked-girl/car-stunt calls to mind Lethal Weapon — the script that launched a thousand buddy-cop knock-offs and transformed the then twenty-four-year-old Shane Black into the highest-paid (and most despised by killjoy critics) screenwriter of the 1980’s. There’s a lot of The Last Boy Scout in here as well, along with sizable samplings from Black’s brilliant directorial debut, Kiss Kiss Bang Bang. Once again we’ve got two mismatched, down and out detectives in over their heads on a case that finds them slouching towards redemption. There are never really any new toys in Shane Black’s sandbox but he always plays with them better than the other kids. (Even when tasked with making Iron Man 3 for Marvel he knocked Downey out of the super-suit and turned him into a tattered gumshoe.)

The Nice Guys is a legitimately clever mystery but that’s almost beside the point. (The film feels like it will play even better on repeat viewings when you can tune out the plot altogether.) It’s about incidental pleasures like shit-talking henchmen, collecting clues and the oddball chemistry of its co-stars. Crowe, built like a side of beef and decked out in a periwinkle pleather coat, grunts and growls with surprising sensitivity. Gosling, so often struggling to reconcile his weirdo character actor tendencies with his matinee idol looks, delivers one of his most endearingly strange performances. He’s all loose-limbed physical comedy and occasionally incongruous, womanly shrieks next to his partner’s walking-Frigidaire deadpan. These two even *look* funny together.

We’ve got a third detective along for the ride, too. March’s thirteen-year-old daughter Holly (Angourie Rice) has a shelf full of Nancy Drew books and is always a few steps ahead of her elders, having picked up some tricks of the trade while driving her dad’s drunk ass around on stakeouts. She also provides the emotional ballast for a movie that would otherwise be in danger of floating away on glib slapstick violence.

I’ve heard from critics who aren’t at all comfortable with the scenes of this scrappy child endangered in the film’s sleazy pornographic milieu, but I think it’s crucial that she’s the one to snap both men out of their self-pitying stupors – a shared realization that all these Mistys once started out as Hollys, so it’s time to stand up and fight to make a better world for them even though we’re all probably gonna lose.

Now I worry that I might be making the funniest movie I’ve seen all year sound a bit grim, but what’s always distinguished Shane Black from his scores of imitators is that he takes his characters seriously, even in a comedy like this one. Watch for the careful setup and payoff involving Gosling’s sense of smell, or his empty, rented pool with its puddles full of cigarette butts. Crowe’s soulful palooka is basically his L.A. Confidential character twenty years later had he never met Kim Basinger. (There’s a reunion of sorts here as Basinger plays the mother of a missing ingénue, but it pains me to say she’s not particularly good.) These guys aren’t very nice, but they’re yearning to be. You feel for them.

Of course they’re also hilarious, with wonderfully structured recurring quirks that harken back to a time when filmmakers actually put some thought into writing jokes based in character instead of just letting the actors stand around on the set improv-ing until the cows come home. Gosling’s unwavering confidence when pronouncing malapropisms is a gift that keeps on giving, as is a rather spectacular set-piece in which he keeps getting hit by the same car.

“Well, at least you’re drinking again,” says one alcoholic to another in a dazzlingly cynical “happy” ending that’s also strangely full of joy. The Nice Guys finish last, but they make a damn good show of it.