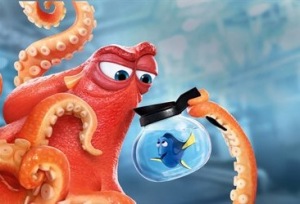 Perhaps it’s because I’m a soulless husk of a man and dead inside, but the Pixar formula just isn’t cutting it for me anymore. You’ll find no argument here that the animation studio’s heroic run from 1995’s Toy Story through Up in 2009 was all but unprecedented in its consistently enchanting assembly of wondrous new worlds. (So great, in fact, that we’ll let them take a mulligan on Cars. Even Babe Ruth struck out sometimes.) But Finding Dory arrives in theatres not long after Monsters University, and you might be a bit unnerved to learn that The Incredibles 2, Toy Story 4 and Cars 3 are all already on the way.

Pixar settling down into a sequel factory is, I suppose, the way of all things Disney these days and maybe wouldn’t be as troubling if even their original films weren’t starting to feel like sequels, too. This particular heartless bastard shed no tears during last summer’s Inside Out, which transplanted the final segment of Woody Allen’s Everything You Always Wanted To Know About Sex into yet another Pixar movie about two mismatched characters separated from their group and learning to love one another during endless contraption-like chase sequences. A widely circulated internet meme adroitly pointed out that once toys, bugs, monsters, fish, cars, rats and robots all have feelings, the only logical follow-up was for feelings to have feelings. (Also, Bing Bong was annoying and I’m glad he’s dead.)

Finding Dory inverts Pixar’s beloved 2003 Finding Nemo by replacing a father’s search for his son with a daughter trying to find her parents. Dory, the absent-minded blue sidekick (voiced by Ellen DeGeneres) takes center stage for the sequel after a bump on the head triggers a flashback to her long-lost mom and dad. Presented as comic relief in the first film, Dory’s daily struggle with short term memory loss is fairly harrowing here, and certain scenes should probably come with a trigger warning for parents of special needs children.

It’s no easy feat building a story around a character who can’t remember anything that just happened, with the screenplay constantly required to cheat its own premise (this isn’t Memento) and work around the fact that a little of this character goes an awfully long way.

Undeterred by her disability, Dory sets out trying to find her folks at a massive California marine preserve, once again travelling with worrywart old clownfish Marlin (Albert Brooks) and his plucky son Nemo (newcomer Hayden Rolance, because I assume the original kid’s voice changed sometime over the past thirteen years.) The first thing you’ll notice about Finding Dory is that the ocean sure got a heckuva lot smaller between films, and now can be traversed in mere minutes of screen time instead of an entire feature. That speeded-up quality is emblematic of the sequel, in every way bigger, louder and more action-packed than its predecessor, which isn’t necessarily for the best.

Quickly split-off from Marlin and Nemo –both could probably have been excised from the story without much fuss– Dory soon finds herself navigating the confines of an eco-friendly aquarium in the company of the film’s finest creation; a curmudgeonly seven-armed octopus named Hank, voiced by Al Bundy himself, Ed O’Neill. (The missing limb makes Hank technically a “septopus,” which Dory keeps reminding him as if for the first time.)

It’s a smart move giving us a crotchety audience surrogate who’s allowed to get as exasperated with our heroine as we do, even if that means this becomes… yet another Pixar movie about two mismatched characters separated from their group and learning to love one another during endless contraption-like chase sequences.

I honestly zoned out during a lot of the action and found myself focusing on the miraculously detailed background animation. Whether we’re talking about the slight residue of gunk on these fish tanks or the shimmering reflections of light upon water and glass, Finding Dory is a technological astonishment. I got more out of contemplating each magnificently rendered grain of wet sand than I did trying to figure how these small aquatic creatures have suddenly become capable of performing such outlandish stunts. The best parts of the film are the too few occasions when it pauses for long enough to let us drink in the majesty of what we’re being shown.

Pretty sure I checked out for good when the octopus started driving a truck. You may have more patience than I.