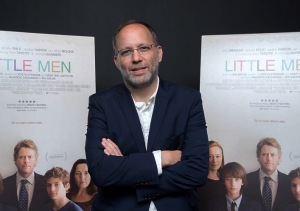 Earlier this year, writer-director Ira Sachs brought the terrific Little Men to IFFBoston. After a screening at the Coolidge Corner Theatre, one of our most eloquent filmmakers discussed his intimate approach to storytelling, an unused ending and the remarkable performances from young stars Theo Taplitz and Michael Barbieri. Here are some edited highlights from the Q&A:

I was a theatre director in college and throughout high school. I grew up in Memphis and I was involved in something called the Memphis Children’s Theatre, which was a bit like the theatre world that you saw in this film. One of the things I remember about that time is there was a group of kids who were able to cross a lot of boundaries somehow that their parents could not. Throughout the rest of my life I was never again able to be in a community that was so integrated in terms of class, in terms of sexuality and race. It was a melting pot. I think kids somehow jump over things that as we get older it becomes much harder for us to do.

In terms of working with actors, I do have certain strategies that I have developed in my work, including that I don’t rehearse the actors before we start shooting. I speak with them each individually about the script, and also about life and the world in which they are going to inhabit, but I really don’t want to hear anything before the camera rolls. It’s not like I’m just saying “go do it,” but I don’t want them to be thinking about what they’re going to do. In a way it’s the opposite of theatre, where you want everything to be repeated. In film you want to be able to capture the one time only.

I would actually say that I have never worked with an adult actor who was easier than working with these two kids. Pretty much across the board, adults are more needy than children. They need a kind of talking to and comfort, and there’s a certain kind of insecurity which these kids did not have. I think to be a good actor, whether you’re ninety or nine, you have to have a level of emotional sophistication. It doesn’t mean you can necessarily articulate it or put it into words, but these were very bright, fast kids. They understood what was going on between the adults and between the other characters and themselves in a very immediate way.

I think people often reveal the unexpected and the unobserved between scenes, between the dramatic moments that you find in other films; when they’re alone, when they’re getting from one place to another. I also find that ever since I was able to drive when I was sixteen, something about the car is a very dramatic space, because everything is enclosed and there’s no way out. So I often find that those transitions from getting home or getting to someplace are very interesting to me.

The end led to some interesting questions. Making the film we had some thoughts that it would be a more Hollywood film. There was an ending we imagined that was much more resolved and much more upbeat, to tell you the truth. It didn’t feel at all authentic to the film we made. We shot this ending as well and it was clear that we were not able as screenwriters to resolve these very real issues that can’t be resolved in the world in an easy way. And to wrap them all up, it felt actually kind of violent to the characters that we had presented.

The other ending, at the museum they met. They started talking. One of them had gone to Africa, he’d seen his father. The mother was in real estate. One boy, he still had his new girlfriend. The other one was maybe gay. There was, like, all this stuff, and it just felt imposed. And actually, to tell you the truth I don’t talk about this ending that much, but the kids couldn’t act it. It was fascinating. I kept going, “let’s do it again… okay one more time.” They couldn’t do it! They could do anything if the material was honest.

So the film now speaks to something that I find is pretty common, this friendship that many people have gone through that somehow gets lost. I’m gonna take this moment to just ask, how many people in the audience remember someone that they were very close to that, for whatever reasons, when they got a little older was no longer their intimate friend?

[Big show of hands from the crowd.]  Yeah, so it seems to be speaking to a human truth.

What I’ve noticed about this film, having watched it a couple of times now that it’s finished, is that it starts very open and you don’t know where you’re going. Then slowly the doors kind of start shutting and it becomes very focused on this drama between these five people. That is something that tends to be the direction of a lot of my films. The world begins as big as it can be, and then part of my job as a storyteller is to bring the audience closer and closer and closer to these characters in a personal way, where somehow you’ve started on the outside and by the end you’re on the inside.

Ira Sachs’ Little Men opens this Friday, September 2nd at the Kendall Square Cinema and at the Dedham Community Theatre.