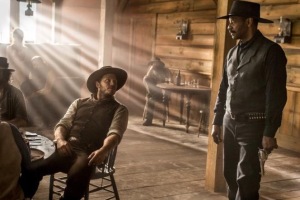 It’s not like I’m losing sleep over it, but I do kinda regret that for petty, personal reasons I never did sit down and write anything about my second-favorite film of 2015, The Hateful Eight.

Last November I was asked to review it for my main gig, but the Boston advertising agency hired to represent the film chose not to invite me to their press screenings. As such, the piece was re-assigned to another local writer who ended up liking the movie considerably less than I did (when I finally saw it) and perhaps more importantly, I was unable to consider The Hateful Eight before filing my end-of-the-year summaries and top-ten lists, including ballots for the Indiewire and Village Voice polls, as well as The OFCS and Boston Online Film Critics Association awards. Speaking as someone who helped tally BOFCA’s totals, I can tell you Jennifer Jason Leigh came in such a close second for Best Supporting Actress that a single voter (namely me, had I been able to see the damn film in time) could’ve put her firmly in first place.

But hey, at least some vindictive regional flacks kept me from earning a paycheck that would’ve been useful for my family around Christmas, and I know a few folks at their office who probably had a pretty good laugh about that. Ho-ho-ho. It only cost the film they were being paid to promote an overwhelmingly positive review in an area publication — with a lukewarm take running in its place — and they managed to deprive their client of at least one award, if not more depending on how the rest of those numbers might’ve played out. Awesome publicity and promotions again, Team Boston.

So yeah, I was a little bitter about the circumstances and ended up loving The Hateful Eight so much that I selfishly elected to just enjoy my holidays rather than get involved in the superheated hashtag-discourse surrounding Quentin Tarantino’s latest and most divisive opus. This was all terribly unexpected, as I hadn’t really liked a Tarantino movie since Jackie Brown. Inglourious Basterds and Django Unchained in particular felt to me like childish stunts — infantile movie-geek fantasies glibly avenging historical atrocities for popcorn kicks.

The Hateful Eight was something different. The movie isn’t correcting historical atrocities, it’s about American history *as* an atrocity – every last character in the picture a snarling, contemptuous racist with blood on his (or her) hands, all trapped together during a blizzard re-fighting the Civil War the way we’re still doing in this country to this day, every day, like in this goddamned election for example. It’s the declaration of an angry political consciousness from an artist I never imagined having one. The movie ends brilliantly, with a black, Injun-massacring sadist and an unreconstructed Confederate bigot cradled together in blood, strange bedfellows admiring a forged letter from Abraham Lincoln – both awed by the promise of an America they know is a lie.

Antoine Fuqua’s The Magnificent Seven is a remake of John Sturges’ 1960 remake of Akira Kurosowa’s The Seven Samurai, but I couldn’t help thinking of The Hateful Eight throughout. This is a sadistic, ultra-violent Western without a drop of blood, because otherwise Sony wouldn’t get a PG-13 rating. It also takes place in an alternate universe where once the Civil War ended everybody’s magically not racist anymore. Denzel Washington leads the Benneton cast of multi-cultural stereotypes, alongside an Irish drunk (Chris Pratt), a Southern gentleman (Ethan Hawke), an Asian martial-arts-guy (Byung-hun Lee), some Mexican (Manuel Garcia-Rulfo), a Comanche warrior (Martin Sensmeier), and a Mountain Man played by Vincent D’Onofrio who I think might be from another planet.

If you’ve seen either of the other movies you already know that some poor, hardworking folks are being run off their land by a greedy robber baron and their only hope is to hire these seven mercenary miscreants to save the town. The villain here is played by Peter Sarsgaard in one of the year’s most embarrassing performances, mincing and shouting with such a pronounced absence of menace it’s like watching one of your stoner friends trying to mimic Gary Oldman in The Professional while he’s waiting for his Hot Pockets to cool off in the microwave.

There’s not all that much to this Magnificent Seven besides actors striking poses and leaning on things. I guess Denzel looks cool riding a horse while clad in black, but his character’s (screamingly predictable) motivation isn’t revealed until the final scene, and playing the strong, silent type up until then is hardly the best use of this magnetic motormouth. But at least he seems like a grown-up. That’s more than you can say for Chris Pratt, who comes off like a little kid on Halloween wearing his big brother’s oversized cowboy costume. People (mostly Marvel nerds) keep calling Pratt “this generation’s Harrison Ford” when he strikes me more like Patrick Swayze on cold medicine. Still, I feel sorry for any actor trying to navigate the cartoonish collection of macho tics he’s been saddled with by screenwriters Richard Wenk and True Detective laughingstock Nic Pizzolatto.

I did enjoy Ethan Hawke’s performance as a gun-shy Confederate sharpshooter quite wondrously named Goodnight Robicheaux, even though I’m still waiting for an explanation as to how he ended up so cool with taking orders from a black guy. Look, I’m not averse to the idea of re-doing The Magnificent Seven as some sort of a post-racial utopia fantasy thing, I’d just like to know where you’re trying to go with it.

Unfortunately Antoine Fuqua is not the kind of filmmaker who thinks things through. (Most of his movies are garbage.) He makes slick, superficial packages that are typically too violent for their own good and that’s the case again here. Awash in chintzy CGI, the film has a sickly avocado sheen to it, as if it was color-corrected in post-production to look like a can of Bud Lime. A few laughably phony background shots look like digital reproductions of paintings you’d see in a dentist’s office, and depending on how recently you’ve re-watched Blazing Saddles some of these scenes might feel uncomfortably familiar.

Maybe I’m off-base here in drawing comparisons between two films about African-American cowboys with consecutive numbers in their titles, but given all the performative hand-wringing over The Hateful Eight last winter, the easy-lay critical passes doled out for The Magnificent Seven this past week have really gotten under my skin.

The best Westerns interrogate our national mythology and force us to reckon with difficult truths about our country. The worst are full of shit and peddle ahistorical nonsense in order to con us into feeling better about ourselves. Where do you think this one lies?