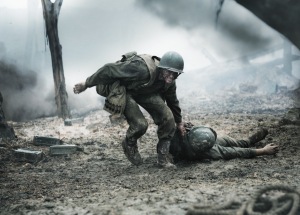 The internal contradictions of the ever-controversial Mel Gibson are roiling throughout Hacksaw Ridge, a deeply conflicted film that — like most Gibson pictures — fumbles with abstract notions of piety while excelling at such vivid, concrete depictions of brutality it is at times almost impossible to watch.

This is the true story of Desmond Doss (played by Andrew Garfield), a conscientious objector in WWII who served as a medic and won the Congressional Medal Of Honor without firing a shot. In fact, our devout Seventh-Day Adventist never even picked up a rifle, yet still managed to save the lives of seventy-five men during one of the Pacific’s bloodiest battles.

Only Mad Mel could make a film about the virtues of pacifism that’s also the most insanely fucking violent thing I’ve seen in the ten years since he last directed a movie.

Gibson is an extraordinarily gifted filmmaker with no filter, one whose extensive personal issues are bubbling up so close to the surface in his work that any review usually ends up doubling as armchair psychoanalysis. He’s also had a mighty struggle with the drink, as has been endlessly documented over the years of arrests and hateful outbursts that damn near ended his career.

I bring those up only because there’s a weirdly fascinating undercurrent to Hacksaw Ridge that presents violence as an addiction, with our hero trying to avoid following in the footsteps of his abusive, alcoholic WWI vet father (Hugo Weaving) and constantly flashing back to a childhood scuffle during which he himself almost killed his older brother with a brick.

Doss abhors violence with a dry-drunk’s determined self-abnegation, ever mindful that he’s always one swing (or sip) from the abyss. As proved most memorably in The Passion Of The Christ, to Gibson there is nothing more transcendently macho than turning the other cheek and stoically taking your lumps like a man.

And so Desmond Doss is mocked, beaten, scorned and court-martialed for his refusal to handle firearms. His tormentors are an adorably antiquarian platoon out of a hackneyed 1940’s film, led by Vince Vaughn’s blustery drill sergeant and a gallery of mostly Australian supporting actors with broadly unconvincing American accents and names like “Smitty,” “Hollywood” and “Teach.”

The first half of the film is, putting it politely, not very good. (The less said about Garfield’ goonish wooing of a nurse played by Teresa Palmer, the better.) But like the stiff and unconvincing early scenes of domestic tranquility in Apocalypto and Braveheart, this is all merely setting the kitchen table before our director burns the whole goddamn house down.

Once a fog dramatically lifts like curtains parting in Okinawa, revealing the vertiginous cliff from which the picture takes its name, Hacksaw Ridge becomes an almost unbearably splattery charnel house massacre, directed with Gibson’s usual expert attention to spatial geography and camera movement within large-scale battle sequences, as well as his penchant for viscera.

Oh my god this movie is so fucking violent.

There are body parts everywhere and flame-throwers and entrails and screaming and the woman seated next to me next to me at the screening was curled up in the fetal position watching it through fingers clasped over her eyes, mouth agape. (But notice she didn’t leave.) It makes those first twenty minutes of Saving Private Ryan look like your favorite episode of Hogan’s Heroes.

Because Gibson is a filmmaker who works (and seemingly often lives) at extremities, Doss’ repudiation of violence must be tested by the most batshit, crazily violent spectacles you’ve ever witnessed. Hacksaw Ridge works in the same way The Passion Of The Christ and Apocalypto worked, beating the crap out of the audience with a ferocious sadism that the ardent religious convictions of the filmmaker seem to be either enabling or only barely keeping at bay.

Mel’s obviously a guy with some serious issues, and the movies he directs feel like he’s earnestly attempting to work his way through them, albeit not always successfully. He’s like if Sam Peckinpah tried to stop drinking and went to church all the time.

“Too much Good Friday, not enough Easter Sunday,” said one of Martin Scorsese’s old seminary buddies when asked to describe his friend’s work. Gibson’s movies are all long Good Fridays, and there’s something scary going on within them that’s spectacular to watch.