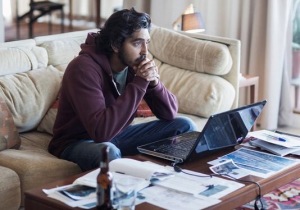 I can think of very few films that start out so promisingly only to crater as catastrophically as Lion, Harvey Weinstein’s favorite son in this year’s Oscar derby and thus the movie you’re most likely to be sick to death of hearing about three months from now. Based on Saroo Brierley’s autobiography A Long Way Home, this frustrating film begins with artful evocations of Dickensian squalor and turns into a movie about a guy staring at a laptop. The first hour of Lion had me on the edge of my seat. The second is so boring I nearly wept.

Brierley’s story is indeed a remarkable one, though in all honesty it seems better suited for something like a TV newsmagazine segment or a This American Life podcast than a feature-length movie. (I know he’s not American but roll with me, folks.) As a young boy growing up in India, Saroo became separated from his older brother in a crowded railroad station. The lost child climbed aboard an empty train, fell asleep and woke up on his way to Calcutta. A thousand miles from home and unable to speak the local language, Saroo was shuffled from the street to a shady orphanage before being adopted by a kindly couple in Tasmania.

Twenty-five years later and a continent away, the adult Saroo used Google Earth to check out thousands of Indian railway stops before finally seeing the one he remembered as his hometown and at long last found his family. Pretty amazing, right? But if you’re wondering how one would go about dramatizing a story that consists mainly of a guy thinking really hard while clicking on things, rest assured screenwriter Luke Davies and director Garth Davis haven’t exactly cracked that one, either.

A shame, because Lion’s early passages are quite something. Young Saroo is played by the charismatic child actor Sunny Pawar, and his plight is rendered in harrowingly visceral images by director Davis and Zero Dark Thirty’s great cinematographer Greig Fraser. They keep the camera low to capture Saroo’s perspective, lost and alone in mobbed city of millions. The environments have a rough, febrile beauty without falling prey to the Slumdog-gy aestheticization of poverty regrettably fashionable in films about India. Threats are everywhere, including a couple of sex traffickers so skeezy the sequence turned my stomach.

It’s difficult to reconcile the strong, confident filmmaking of Lion’s first half with a second that’s nearly nothing but fumbles. The adult Saroo is played by Dev Patel as haunted and morose, lacking all the ebullience young Pawar brought to the character. (I never once felt like I was watching the same person. Also, they don’t look anything alike.) Rooney Mara plays his girlfriend, and I’m still not sure what such a talented actress is doing in such a thankless role, or how this chemistry-free couple got together in the first place.

Saroo’s adoptive parents are played by Nicole Kidman and David Wenham as embodiments of positivity and light. Kidman even gets a glowing monologue that I’d wager in an early draft of the script read as: “Oscar Clip To Be Written Later.” So I guess I was alone in wondering that if these are such perfect parents, how could Saroo reach adulthood being entirely unfamiliar with Indian food? (They seriously couldn’t have taken him out to a restaurant?) Lion ducks a lot of questions about cultural assimilation, and largely skims over the messy matter of Saroo’s violent, maladjusted also-adopted brother – going so far as to wrap up their storyline while the latter is asleep.

There’s lots of time to muse on what’s missing from Lion’s second half while your mind is wandering during what’s there: a sullen Saroo hunched over his laptop, apartment walls covered in maps and notes like an obsessed cop on a TV procedural while Mara nags ineffectually in the background. Davis even botches the easy layup ending, having done such a poor job laying out the landmarks of Saroo’s hometown that his return doesn’t carry any visual kick.

Like a lot of The Weinstein Company’s recent Oscar bait, Lion ends with more than half a dozen pages of onscreen text telling you all sorts of things the filmmakers couldn’t figure out how to fit in the story – including an explanation for the title. Given that action-packed second hour, I’m surprised it didn’t end with someone just Googling this stuff.