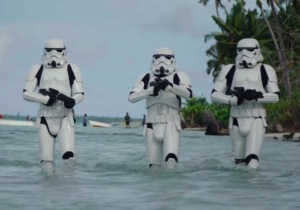 If nothing else, it’s the most incredibly *tactile* digital effects extravaganza I’ve seen yet. As audiences we’ve become inured to the ersatz qualities of CGI, often giving a pass to plasticky spaceships protruding from too-clean backgrounds without fully appreciating how ridiculous such objects tend to look until small-screen second viewings down the road. Indeed, the technology is improving at such a rapid clip it’s entirely possible that Rogue One: A Star Wars Story might soon seem as tacky as George Lucas’ oft-scorned prequels, but I’m not so sure.

This is the first time I can recall feeling like the effects were part of honest-to-God environments — whipped by the wind and spattered with rain. Everything looks dirty. The AT-ATs and X-Wings and all your favorite toys are so fully integrated into the landscapes, I momentarily forgot that I was watching ones and zeroes. I thought all these things were just there.

Anyone who saw director Gareth Edwards’ 2014 Godzilla reboot can tell you he’s got a fantastic sense of scale, smartly orienting the viewer’s eye to massive objects while placing them in unexpected parts of the frame. (A couple of Death Star shots here raised the hairs on the back of my neck, which is saying something because after The Force Awakens I was pretty much done with Death Stars.) But anyone who saw Godzilla can also tell you that Edwards has no knack for characterization. He tried to use the Jaws model of ramping up suspense by keeping the monster off-screen for as long as possible, forgetting that Jaws filled out all that buildup with Roy Scheider, Richard Dreyfuss and Robert Shaw playing indelible roles, while Godzilla starred Aaron Taylor-Johnson.

How Edwards fared with Rogue One is probably already implied by the fact that I’ve spent the first three paragraphs of this review talking about the special effects.

The subtitle A Star Wars Story is meant to inform us that we’re not watching an official “Episode” of the Skywalker saga, but rather a spin-off set in the universe created by George Lucas that The Disney Corporation recently purchased for $4 billion. It’s a pretty good idea — these “anthology” films — since the world of Star Wars is so vast and full of such endless possibilities, who wouldn’t want to play in that sandbox? It’s also a canny way for Disney to crank one of these things out every damn Christmas while providing a bit of variety. But only a bit.

For all intents and purposes Episode III.V, Rogue One is about how Princess Leia got those Death Star plans that she stashed inside of R2-D2 during the opening moments of the original Star Wars. (No, I’m not calling it A New Hope and you nerds shouldn’t either.) Modeled after WWII movies like The Dirty Dozen and Where Eagles Dare, the film sends a bunch of scruffy expendables on a suicide mission and aims for a harder, more violent edge than other entries in this family-friendly franchise. Even the funny robot is an asshole.

Felicity Jones stars as our tough-as-nails team leader, daughter of a brilliant scientist (Mads Mikkelsen) who was abducted by an Imperial officer (Ben Mendelsohn) and conscripted into designing that big scary space station in the sky. But it turns out daddy’s built a secret flaw into the reactor –rather cleverly answering thirty-nine years of snarky geek questions about how such a gargantuan death machine could be felled with a single shot—and she’s gotta get this information through a bureaucratic Rebel Alliance paralyzed by internecine sniping.

Probably worth noting here that something like forty percent of Rogue One was re-shot this past summer under the supervision of co-screenwriter Tony Gilroy, with legendary cutting-room fixer Stuart Baird brought on board in addition to the three credited editors. As released, it’s a hash of muddy motivations, needless complications and jaw-droppingly spectacular action sequences weirdly devoid of emotional impact. Forensic auteurists will have a field day parsing all the material in the trailers that didn’t make the final cut. (Even the Beach Blanket Stormtrooper Bingo publicity photo posted above this review is nowhere to be found in the finished film, but I used it anyway because it makes me smile.)

Jones seems to be giving two entirely different performances, and she doesn’t have a large enough screen presence to carry a film like this the way Daisy Ridley did last year in The Force Awakens – which for all its considerable flaws was extremely well-cast with people we look forward to spending time with in the next episode. Baby-faced Diego Luna lacks the gravitas to pull off playing a disillusioned assassin here and I’m still not sure what Riz Ahmed was supposed to be doing in this movie. Camaraderie is crucial in these sort of stories and this crew just doesn’t have it.

Much better are Wen Jaing and Donnie Yen as guardians of an old Jedi temple, the latter doing an inspired riff on Japanese folklore hero Zatoichi The Blind Swordsman. It’s a clever way to continue Lucas’ tribute to the Asian cinema that informed his original films, and these two actors lighten up a dour film considerably. But if any performer runs away with Rogue One its Alan Tudyk, voicing a droid with terrible manners, rudely blurting out the worst things he could possibly say at tense moments. It probably explains all you need to know about both me and the film that the only time I found myself moved was during the dickhead robot’s final scene.

Michael Giacchino’s uncharacteristically terrible score keeps swelling up toward familiar John Williams themes before backing down into minor keys – sounding like one of those chord-inverted knockoffs of popular songs you used to hear on car commercials. I guess that almost works as a metaphor for Rogue One as a whole. For awhile the movie is at least admirably attempting to try on a different tone and tell another kind of Star Wars Story, but then the last reel devolves into a flat-out orgy of familiar faces and fan service, sucked in by the tractor beam of nostalgia for the 1977 original – which we just saw a beat-for-beat remake of last Christmas.

Don’t get me wrong, I’ll probably go see Rogue One for a second time just to gawk at the wondrous visuals again on a giant screen. But if we must have a Star Wars picture every December for the rest of our lives, I’m hoping they’ll eventually stray from familiar formulas and take us to unknown worlds, far, far away from those first couple of films. It’s a giant universe out there, but in these movies it just keeps getting smaller.