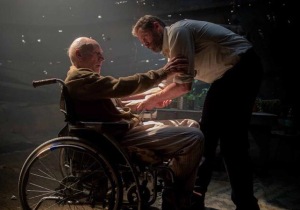 Although this is the third film of the third X-Men trilogy and the tenth picture in the franchise overall, Logan wants you to know that it really, really, really isn’t like other superhero movies. With its grisly, slow-motion mayhem and almost parodic levels of profanity, this grim wallow in futuristic miserablism follows in the footsteps of last year’s tiresome Deadpool attempting to revive the X-Movies with R-rated action and a surfeit of naughty words. Gone are the goofy, brightly-colored splash-page visuals and Olivia Munn-in-a-swimsuit-at-Auschwitz forehead-smackers of this past summer’s idiotically amusing X-Men: Apocalypse. You won’t find Deadpool’s smug, self-congratulatory one-liners either, as Logan is all business. Serious, serious business.

It’s 2029 and the mutants are gone save for Hugh Jackman’s former Wolverine, now driving a limo and drinking himself into oblivion somewhere near the Mexican border. He’s got the addled Professor X (Patrick Stewart again) stashed in an abandoned water tower and cared for by a sensitive albino (a surprisingly solid Stephen Merchant.) The old man is succumbing to a degenerative neurological disease and when he suffers seizures his psychic powers can wipe out entire cities. So far, so glum.

Into all this despair wanders Laura (Dafnee Keen) — a pre-teen top-secret government project culled from Wolvie’s DNA, boasting his same healing powers and retractable metal claws. She’s on the run and wants the surly chauffeur to bring her to a possibly apocryphal paradise somewhere near North Dakota that’s rather annoyingly named Eden, because she read about in a comic book. (In one of the movie’s few clever developments, X-Men comics exist as fanciful retellings of much darker true-life stories, a la the dime novels in Unforgiven.)

After much ado we eventually get on the road, and instead of following typical superhero formulas Logan bites off massive chunks from other movies like Children Of Men, Firestarter, True Grit, The Professional, Terminator 2, Alice In The Cities, The Outlaw Josey Wales, A Perfect World and hell, pretty much the entire cinema of Clint Eastwood until the last-half hour when it becomes a straight-up remake of Mad Max Beyond Thunderdome. There’s even a helpful scene in which everybody stops what they’re doing and watches Shane on TV while Patrick Stewart outlines the themes of the film, feeding P.R. campaign talking points to hack critics. (“You know, it’s really a Western” is the new “It’s really a paranoid ‘70s thriller.”)

Of course there’s nothing wrong with borrowing from your betters, but director James Mangold just isn’t very good at it. A chase movie where nobody’s ever in much of a hurry, the languid Logan is comprised mostly of folks sitting around feeling sorry for themselves. It’s an hour-and-a-half or so worth of story stretched out to a deadly 135 minutes. Though he’s great with actors and has a classicist’s sense of framing, Mangold has never been able to pace a picture. Even his ticking-clock stories –like the star-studded Lumet wannabe Cop Land or his 3:10 To Yuma remake– boast fine performances and midsections saggier than my own.

Mangold worked with Jackman previously on 2013’s The Wolverine, which sent the character to Japan for a nifty little neo-noir that shit the bed in the third act by making him fight a giant robot in one of those interchangeable underground supervillain lairs. To its credit, Logan keeps the conflicts at a human scale throughout, opting for a more metaphorically loaded climax if by then you’re not past the point of caring.

I myself had mentally checked out about forty minutes before, during a vicious slaughter of innocents so gratuitous and unearned I nearly opted for the exit. There’s no reason for Logan to be this ridiculously violent except that it can be, which is also why all the characters swear every other word for no fucking reason whatsoever. (I’m told there are only fifty-three f-bombs in the movie but it feels like at least twice that. It’s like listening to little kids on a schoolyard who haven’t quite got the hang of cursing yet.)

Typically I tend to adore violent movies with tons of cussing, but none of the explicit gore or profanity feels at all organic to the picture here. These are self-conscious affectations, laid on with a trowel to thrill sad men in the comment sections who demand you take their kiddie shit seriously. As Logan wears on, the movie’s morose nihilism and all-around joylessness come to stink of the same adolescent posturing. By the end, this “comic book movie for adults” feels like one of the genre’s most juvenile entries.