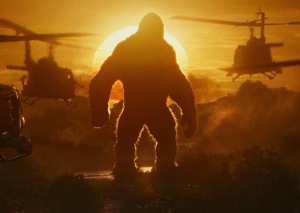 One of the side effects of Hollywood getting out of the mid-level movie business to focus exclusively on blockbusters is that there’s no longer a farm team where studios can groom fresh talent. Up-and-coming filmmakers used to get a couple of medium-budget genre pictures to hone their skills before taking the reins of a tentpole behemoth. Nowadays franchise directors are plucked straight from Sundance and given budgets a hundred times what they’re used to working with, plus a level of studio meddling they haven’t yet learned how to negotiate. Basically it’s like if I was impressed with how well my nephew rides his bicycle so I decided to put him at the helm of an aircraft carrier.

Making movies is extremely difficult, even moreso on a massive scale. Jordan Vogt-Roberts’ Kong: Skull Island has a lot of the same problems that plagued his fellow Sundance kid Colin Trevorrow’s Jurassic World. These are movies with the best special effects money can buy, but they can’t handle a simple transition from night to day, or keep a consistent tone from scene to scene. There’s no flow to these films, none of the actors appear to be on the same page and the storytelling fundamentals of getting characters from points A to B are hopelessly garbled. There’s a word for what’s missing: direction.

Too bad, because Skull Island has a pretty nifty idea for a movie, and at the very least it’s not another remake of Cooper and Schoedsack’s 1933 original (which we’ve learned the hard way can’t be topped no matter how many billions of dollars and extra hours of running time Peter Jackson tries to throw at it.) Set in 1973, the film follows some scientists and their military escort as they attempt to map an uncharted island that just so happens to be the home of the original 8,000lb gorilla. Led by Samuel L. Jackson’s Colonel Kilgore – oops, I mean Colonel Packard, the crew quickly finds their choppers swatted out of the sky and now they’re all stranded in the jungle with a bunch of snarling spider-monsters and huge, icky lizard things.

This should be simple stuff, but for starters there are way, way too many characters in this movie. In addition to Jackson we’ve also got Tom Hiddleston as a dour British mercenary, Brie Larson as a strident (anti-)war photographer, John Goodman as a full-of-shit government contractor and a character actor smorgasbord boasting Richard Jenkins, Shea Whigham, Toby Kebbell and John Ortiz along with Tian Jing, half the guys who played N.W.A. in Straight Outta Compton and that asshole kid from Me & Earl. None of them are given anything remotely interesting to do and then John C. Reilly shows up and steals the whole damn film.

Reilly plays a WWII fighter pilot shot down over the island almost thirty years before, and he rips into the role as a cuddlier version of Dennis Hopper in Apocalypse Now. As if you couldn’t already tell from the ad campaign, there are an awful lot of references to Coppola’s masterpiece here, along with some self-serious, muddy metaphors about the island being a microcosm of the Vietnam War that don’t really make any sense and come off as kinda tasteless in a film about a giant ape beating up enormous reptiles. Besides, Vogt-Roberts appears more interested in Vietnam movies than Vietnam itself, cranking up the Creedence and relishing the Tropic Thunder production design.

For some ungodly reason, what should be a straight-line journey to the evacuation point at the other end of the island is made a mess by constantly splitting up these countless characters and sending them in opposite directions for stupid, screenplay-generated reasons until we don’t know which way is up. Hiddleston and Larson have been quite marvelous in other films but here give two of the most unappealing star turns I can recall seeing in a major studio picture. He’s morose and mopey even while fighting lizards with a samurai sword, and she seems to be trying for a second Oscar. (Watch how strenuously Larson *acts* when taking pictures with her fakey prop camera. This is a performance completely devoid of humor.) Needlessly complicating things further, Jackson’s character goes insane.

I can’t make much of a case for last month’s The Great Wall as a great movie, but as far as big dumb creature-features go it was straightforward and propulsive enough to get the job done without all this pointless dithering around. There was a sure hand at the wheel and it allowed Tian Jing to be a total badass, whereas here she’s stuck standing around holding notebooks and clipboards, nodding at exposition and securing the film’s distribution prospects in China.

Of course none of this is what we came to the movies for. We want to see the big magilla bust shit up, and the monster fights in Skull Island are indeed spectacular. (I sprung for the 4K Laser 3D at my local furniture store and it looked magnificent, each bristling hair on the title character in sharp focus and the twelve-channel sound rattling the walls with every roar.) There were a couple of moments when I even found myself cheering for the big guy, wishing they’d given him a better movie.