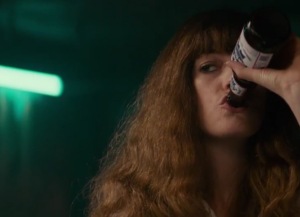 The thing about being a blackout drunk is that there are nights when you very well could have turned into a gigantic Godzilla creature and stomped all over South Korea before waking up the next afternoon none the wiser. That’s sort of the gist of Colossal, a fiendishly funny and wise new film from the gloriously named writer-director Nacho Vigalondo. It’s a metaphorical monster movie about drinking and self-hatred, in which larger-than-life projections of our protagonists’ worst selves wind up doing battle amongst the skyscrapers of Seoul, blowing up their personal barroom psychodramas into Pacific Rim.

Anne Hathaway stars as Gloria, a hot mess well on her way to becoming a disaster. We first meet her stumbling home loaded and lying to her uptight British boyfriend (Dan Stevens) for the umpteenth time before he finally gives her the boot from his fancy New York apartment. Unemployed with nowhere else to go, Gloria drifts back to her parents’ empty old house upstate and settles into a comfortable rut tending bar at a townie tavern owned by a high school pal (Jason Sudeikis) to whom she never paid much mind. Back then she didn’t notice how much he adored her, though Gloria’s certainly not above using that to her advantage now.

Colossal understands the inertia of bar culture better than most movies I’ve seen: the way a couple of drinks after work can drift on into morning, bored hook-ups that happen for lack of anything better to do and the forced camaraderie of people who don’t really even like each other all that much spending hours on end together simply because nobody wants to stop drinking and go home. There’s a scarily good scene late in the film featuring Sudeikis and Tim Blake Nelson that illuminates a cycle of boozy bellowing between so-called friends who have little in common besides the bottle and bottomless loneliness.

Hathaway, who gave the performance of her life playing a similar character in Jonathan Demme’s Rachel Getting Married, hits all these notes spot-on. Gloria’s smart and funny enough to know she’s circling the drain, but she also knows that she’s pretty enough to get away with a lot more than she probably should, especially in this podunk town. I’m still baffled as to why the entire Internet got together and decided to hate Anne Hathaway a few years back, apparently for the sins of seeming like she wanted to win a well-deserved Academy Award while being poised and articulate instead of burping and falling down all the time like “relatable” It Girl Jennifer Lawrence. Regardless, she’s one of the best we’ve got and this is her juiciest role in a good while.

Oh yes, and then there’s all that business about kaiju in South Korea. I’d rather not divulge too much, as one of Colossal’s biggest pleasures is how Vigalondo allows the story to unfold and surprise us. He explains just enough without getting mired in pointless exposition, and his canny use of sound effects and streaming video news footage cleverly keep the film from costing a zillion dollars (while also making it easier for us to not contemplate the mass casualties accompanying what’s really just a doozy of a metaphor about the unconscious collateral damage done by bullies and drunks.)

Besides, this is a film more interested in people acting monstrous than the actual monsters. There’s some revelatory work from Jason Sudeikis, whose bland affability has never connected in previous pictures, yet here just barely conceals a cutting mean streak that’s at times genuinely frightening. Colossal bogs down a bit during its dark, claustrophobic second act. But the ending is both unexpected and exactly right, with a last line that’s priceless and a reaction shot from Hathaway that’s even better.