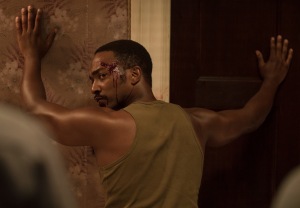 There’s a scene early in director Kathryn Bigelow’s pulverizing Detroit during which a character played by Straight Outta Compton’s Jason Mitchell explains exactly what’s going to happen to you for the next two hours. He’s at the Algiers Motel’s annex, three days into the Detroit riots of 1967, frying up some sausages and schooling a couple of frisky, reckless white girls (Hannah Murray and Kaitlyn Dever) who are playfully considering prostitution as part of some misguided walk on the wild side. Mitchell delivers an increasingly ferocious monologue about how being a black man in America is like living with a gun to your head, ultimately punctuating his street-preacher conclusion by firing a starter’s pistol to rattle the shit out of his terrified young audience.

That five minutes is pretty much Detroit in capsule form. It’s an astonishingly visceral film in which Bigelow and screenwriter Mark Boal want to you to *feel* what so many of us good liberal white folks often claim to intellectually understand. Sure, you probably think you might know all you need to about racism and police brutality in America, but Bigelow wants to knock you out of your smug comfort zone the same way Mitchell is trying to shake up those dopey white chicks. Detroit makes you feel like you’re watching it with that metaphorical gun to your head. Yes, the movie’s harrowing middle hour is almost too excruciating to endure. It upsets viewers and sends them streaming for the exits because it’s supposed to. This is the most controversial movie of the summer because it deserves to be.

Of course this kind of hullabaloo is nothing new for Bigelow, whose sometimes abstruse approach to hot-button topics and relentlessly intense films have resulted in the majority of them being think-pieced to death by garment-rending op-ed writers with little understanding of the arts. This goes all the way back to 1990’s Blue Steel, which if I remember correctly was the wrong kind of feminist or something. (I was at NYU when Strange Days had half the commentariat wanting to burn down the New York Film Festival for choosing it as their Centerpiece Selection. Personally I just wished it’d had a better script.)

Detroit‘s structure is a bit of a bait-and-switch. It begins by taking a macro view, chronicling the city’s history of white flight and urban blight in an animated sequence modeled after painter Jacob Lawrence’s Migration Series. The riot’s first couple of days are captured with a dazzlingly edited combination of newsreel footage, archival photographs and the comings and goings of a bustling ensemble cast. Only gradually do we notice the film’s focus beginning to narrow, until all of the sudden we’re trapped inside the Algiers’ annex with a handful of characters being brutalized by monstrous city cops over the course of an asphyxiatingly claustrophobic night in hell that feels like it’s never, ever going to end.

So many of Bigelow’s films are about malignancies festering within governing bodies –typically macho in nature– and the damage done when institutional safeguards begin to slip. Part of the slow, grinding horror of Detroit is in watching cooler heads peel away and turn a blind eye to the burgeoning sadism at its center. Early on, Will Poulter’s baby-faced fascist is reprimanded for shooting a protestor in this back. “I’m recommending murder charges,” says his supervisor, before sending him right back out on the streets. The State Police don’t want anything to do with what they can tell is going on inside the Algiers, and the National Guard quickly pulls a Pontius Pilate once things start getting out of hand.

When it comes to ratcheting up tension, there’s not a filmmaker alive who comes within spitting distance of Kathryn Bigelow, and Detroit’s middle hour is perhaps the most unbearable set-piece of her career. The damn thing just keeps going on, and on, and on. I have never in my life seen a film so vividly convey the sickening sensation that nobody is coming to save you from these people who have been sworn to protect.

After the blistering, close-up ordeal at the Algiers, Bigelow and Boal try to zoom back out to a macro view once more, chronicling the aftermath for several characters in a series of jagged, wobbly scenes seemingly designed to mimic the sensation of PTSD. It’s a conceit that works better in theory than in practice, but I’m taken with the idea that even the movie itself can’t recover from what we’ve just witnessed.

I can understand why some people don’t want to see Detroit. (Let’s face it, if you’re black you already know all this shit far too well.) But given that the film was released on a day when the President of the United States advocated roughing up suspects while uniformed police cheered on live television, I can think of quite a few people who really should.