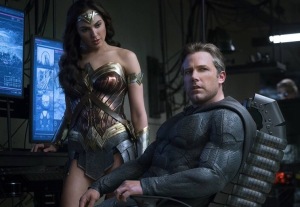 Now that it’s tanked at the box office I guess Justice League is of interest mainly for historical purposes, perhaps to supersede those already forgotten Amazing Spider-Man fiascos in future Cinema Studies classes about the franchise delusions that eventually bankrupted our Hollywood studio system.

Of course it’s fucking awful. What else can you expect from a movie that was written and shot no less than three times over the last two years in a flailing attempt to correspond with wildly vacillating expectations from the corporate office, helmed by two different directors with such diametrically opposed aesthetics that I can’t comprehend these guys even being in the same room together? The only reason Justice League even exists is because of sunk costs, it’s 119 minutes of good money thrown after bad in a mad rush to meet a preordained release date.

Sequels used to get made because people liked the original pictures, but cameras were already rolling on Justice League when audiences recoiled from Batman V Superman: Dawn Of Justice, one of the most singularly unpleasant experiences I’ve ever had in a movie theatre. Director Zack Snyder’s Wagnerian self-pity party transformed two of pop-culture’s most enduring heroes into whiny, nostril-flaring douchebags and smothered all the joy and excitement of their respective legends beneath heavy clouds of ponderous self-importance and ugly bloodlust.

I didn’t want to talk to anyone when it was over, and I almost threw an empty soda at the fat, forty-something, balding dude in an ill-fitting Batman T-shirt who stood up at the end and clapped like Charles Foster Kane. (A few months later I saw this same asshole again at the same theatre, booing the Lady Ghostbusters.)

This D.C. train has been off the tracks for so long, it was almost a year-and-a-half ago that Warner Bros. flew a bunch of “entertainment journalists” (cough) out for an all-expenses-paid vacation in London and frog-marched Ben Affleck around in his Batman costume, forcing him to shake hands with the likes of drunken sex pest Devin Faraci while promising everybody that the next movie will be better.

Now as a Bostonian I consider it my God-given duty to rag on Ben Affleck, but if I’d gone from winning an Oscar and working with Terrence Malick and David Fincher to suddenly being contractually obligated to kiss the illiterate asses of cretins like Faraci while I’m dressed in a silly latex getup and these jerk-offs all pose for selfies with my Batmobile – yeah, I’d probably have just have gone home and shot myself in the face instead of getting drunk and fucking the nanny, or cheating at cards, or whatever the hell it is the tabloids say he did this time. So you’re off the hook with me these days, Big Ben. Hang in there, brother.

Eventually Joss Whedon was brought in to re-write the script and take over the latest round of re-shoots after Zack Snyder left the film due to a family tragedy, a decision apparently made by someone who didn’t see Whedon’s garbage-heap Age of Ultron movie a couple years back. Warner Bros. wanted this to be their Avengers, so it’s pretty much literally a re-make of The Avengers, with a whole lotta heroes being recruited to find a glowing blue box that an effete British badguy in a pointy hat (Ciaran Hinds this time, voicing a CGI embarrassment) wants to use to destroy the world. Except now there are *three* glowing blue boxes, because this movie is bigger and better, I guess.

Oh, and they also bring Superman back from the dead. Apparently now we’re supposed to believe that the whole world has been in mourning for the guy they spent the entire last picture calling an alien terrorist who caused 9/11 and I don’t think he was ever actually cleared after that thing where he was framed by Lex Luthor for destroying Capitol Hill during his war crimes trial. But yeah, somehow now everyone’s real sad and his best friend Bruce Wayne who met him once and then spent most of the last movie trying to murder him has a lot of teary-eyed speeches about how we have all lost “a beacon of hope.”

Justice League makes no sense, and you can never really tell if the characters are referring to scenes that got cut out during its ridiculous journey to the screen, or if the writers are just making shit up to try and ret-con their way out of a corner – i.e. this whole people liking Superman nonsense. Hilariously enough, when Kal-El does finally come back from the dead his costume is about five times brighter than it was in the last two pictures and he has an *entirely* different personality than the petulant child he played in Dawn Of Justice. I wasn’t rooting for the Kryptonite this time.

You don’t get points for being able to spot the difference between Snyder and Whedon shots, the overwrought, deep-shadowed splash-page compositions contrasted with garishly overlit three-camera sitcom blocking. (If Whedon’s cruddy overhead lighting isn’t a dead giveaway, just look for Gal Gadot’s ass. Snyder leads with it in every entrance.) The majority of Justice League must be Whedon’s because it looks like an episode of Roseanne, terrible cinematography highlighting just how chintzy these rubber costumes look in direct light, amid awful green-screens and awkwardly inserted reaction shots of Wonder Woman — the only character anybody came here to watch, relegated to dull den mother duties. She just shakes her head a lot at the silly boys, complaining that “I work with children.”

If I haven’t mentioned other team members Aquaman and Cyborg that’s because they’re merely here to utter embarrassing 1990s catch-phrases like “My Man!” and “Boo-Ya!” while a lot of computer generated crap flies through the air. Meanwhile, Ezra Miller’s Flash makes me think we should start an early-intervention program to keep young kids from watching too many Jeff Goldblum movies.

The most hilarious part of Justice League is that Henry Cavill was filming Mission: Impossible 6 during the final round of re-shoots and thus contractually prohibited from shaving a magnificent mustache he’d grown for that role. Furious as I am at the missed opportunity of Superman coming back from the dead rocking an awesome ‘stache, the genuinely terrible F/X work that’s gone into removing it makes it look like the Last Son of Krypton is suffering from some sort of palsy and the screen blurs around his mouth whenever he tries to talk.

This movie reportedly cost three-hundred million dollars, and it can’t figure out how to fix a fucking mustache.