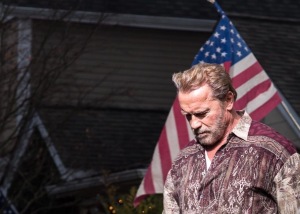 His hilarious feud with the President of the United States over reality show ratings notwithstanding, the former Governator of California has been keeping a low profile lately, doing some of the most interesting work of his career in low-budget independent movies nobody’s going to see. Can’t say that I blame them, as outside of Arnold the films just aren’t very good. Like his strikingly well-acted 2015 misfire Maggie, Aftermath is another dour drama without much to recommend besides a heartbreaking Schwarzenegger performance.

Loosely based on a true story, the film stars Schwarzenegger as Roman Melnyk, a Ukrainian immigrant construction worker who loses his wife and daughter in a plane crash. The bodybuilder proportions now scaled down to merely barrel-chested, Ah-nald’s become surprisingly convincing as a regular fella, perfectly costumed here in tacky, tucked-in loud-print shirts and a weathered leather coat. The giant has gotten awfully gentle, and as in Maggie it’s affecting to see him so helpless.

Javier Gullón’s screenplay cuts back and forth between Schwarzenegger’s story and that of an air traffic controller played by Scoot McNairy, who slips up on the job in an honest mistake and is subsequently pulverized by guilt and grief. Ostracized by the community and abandoned by his wife and child, he eventually starts over in a new town with a new name at the behest of a sympathetic airline executive played for some reason by the great Martin Donovan.

Aftermath schematically sets these characters on course to mimic the mid-air collision that shattered their lives. We alternate back and forth between Schwarzenegger’s hollowed-out sadness and McNairy’s twitchy self-loathing with a doom-laden, plodding inevitability. Director Elliott Lester has no interest in modulating the film’s tone, every scene playing out in the same hushed, numb register until you wish someone would open a fucking window or something to let some life in. I suppose there’s a misguided artistic integrity in being this monotonously downbeat but it’s also really boring to watch.

The mind wanders instead to matters of Schwarzenegger lore, thinking about the divorce and scandal that derailed his post-politics big-screen comeback, and how now after Sabotage and Maggie this is his third star vehicle in as many years in which the hero loses his wife and family. (Not to play armchair psychologist, but it’s starting to become a thing with this guy.) We used to spend Schwarzenegger movies waiting for him to rescue his oft-kidnapped kin and kill all the bad guys while delivering corny quips. But now the families are already gone and there’s nothing he can do to save them, the act of killing depicted as stupid, wasteful and sad.

Schwarzenegger these days seems to be quite purposefully reconsidering his career and revising his screen persona. He’s an Eastwood in search of his Unforgiven. Aftermath ain’t it.