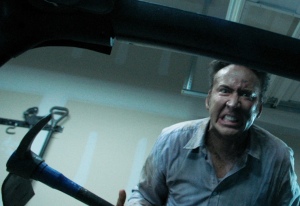 Back in college I was on a pretty big Elvis kick and had taken to wearing those silver retro-aviator shades The King used to rock during the Vegas era. One day while walking to class I caught a glimpse of my reflection in a window, with those giant sunglasses and my disintegrating iron-on Saturday Night Fever T-Shirt and thought, “Jesus, look at that asshole hipster!” I realized that strangers passing by probably assumed I was doing some affected nineties “irony” thing (there was a lot of that going around back then) but the truth was that I really just loved Elvis Presley and Saturday Night Fever.

These days people tend to think I’m being ironic whenever I tell them how much I love Nicolas Cage. I understand that for an entire generation of young moviegoers he’s become more meme than man, and even a fan as devoted as yours truly can’t keep up with the truckloads of cruddy DTV thrillers the one-time Oscar-winner grinds out as if on a treadmill. I don’t care. I’m still thrilled beyond words whenever Nic goes gonzo.

We’ve developed such boringly limited ideas of what screen acting should be, few things make me happier than a bug-eyed, over-the-top Cage freakout. There’s unbridled joy in his maniac turns, a thrill in performing I find contagious. The only time I agree with the conventional wisdom that Nicolas Cage is a bad actor is when he’s stiffly trying to dull himself down into leading man mode. Here’s a guy who needs to let his freak flag fly.

Brian Taylor’s Mom And Dad really isn’t much of a movie, but it’s a terrific delivery system for a batshit Nic Cage performance. We’re talking about a film that finds the actor wearing a Misfits T-Shirt and smashing a pool table with a sledgehammer while singing “The Hokey Pokey.” And that’s early on, before the character loses his mind.

Taylor is one half of the dynamic duo that directed the deliriously disreputable Crank movies. (He also previously collaborated with Cage on Ghost Rider: Spirit Of Vengeance, a disappointingly PG-13 affair from which I can only really recall a throwaway gag in which our hero pisses fire.) Mom And Dad has the high-concept hook of a tranquil suburban town where one sunny afternoon a mysterious mass hysteria compels all the parents to try and murder their children.

The subtext here is so on the surface it’s basically just text, as cubicle drone Cage already resents his wife (a gleefully game Selma Blair) and kids for cramping his style, having rapturous flashbacks to the time when as a teenager he stole the old man’s Trans Am and fucked his girlfriend in the front seat while doing donuts before he totaled it. Nowadays the old ball and chain won’t even let him have a man cave in the basement, so it’s one of the movie’s more amusing grace notes that attempting to kill the kids puts a lusty spark back into their dead marriage.

The concept is just clever enough for you to wish it had been developed further. At a mere 83 minutes Mom And Dad feels stretched awfully thin, primarliy content to be a hard-R Home Alone if the little brat had been chased around by John Heard and Catherine O’Hara instead of Joe Pesci and Daniel Stern. Anyone who’s seen the Crank movies already knows that Taylor has a knack for absurdist gore, punching up the mayhem with furious edits and left-field giggles.

But Cage being bonkers remains the main attraction, and I damn near lost it laughing near the end when —blooded and half-burnt to a crisp with Fruit Loops stuck to his face— he taunts the children, waving a Sawzall and chanting: “It… saws… all… saws… all…” They should put that in a powertool commercial.